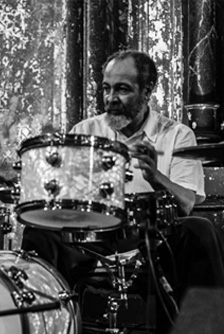 William Parker will be giving a talk after tonight’s concert.

BECOME A ROULETTE MEMBER and receive a special members discount for William Parker’s 3 night series.  For these events, members are welcome to extend their discounts to a guest ($5 off for standard Roulette Members, FREE for All Access Members).  To take advantage of this special discount, please contact the Roulette box office to reserve your member’s guest ticket at (917) 267-0368 or roulette@roulette.org.

PROFESSOR MILFORD GRAVES
He was born in Jamaica, New York. He started playing drums at three years old. His studies in African and Afro-Caribbean music/drumming started at eight years old. He started studying in Jazz in his early teens. In 1965, he studied North Indian Music/Tabla drumming with the renowned Doctor Wasantha Singh, an Indian/Buddhist musician-guru.  After high school he attended City College of New York, New York Community College, Eastern School for Physicians Aides (NY), and the Occidental Institute of Chinese Studies (Canada). He is listed in Who’s Who in America, Groves Encyclopedia of Music, Encyclopedia of Jazz, as well as many interviews, articles, and featured stories in various international publications (newspapers, magazines, journals, and books). During the past 42 years he has performed in many music events, and given countless lecture-demonstration/ workshops on Medicine (herbology, acupuncture, nutrition, etc.), and Body-Movement/Martial Arts on an international level – including the 1983 International Conference on World Medicine at the Waldorf Hotel in New York. From 1971-73, he developed and conducted a clinical laboratory for a private animal hospital in New York. On July 1, 1993, a special 45 minute documentary video, titled “Legend Drummer Milford Graves,” was televised throughout Japan on NHK-Television at a time called the Golden Hour. He is presently director of the International Center for Medicinal and Scientific Studies, co-director of the Institute of Percussive Studies, and Professor of Music/Music Healing at Bennington College in Vermont (1973- 2012).

He was awarded a Guggenheim fellowship in music composition in 2000, and a Proclamation from New York City at City Hall on January 19, 2005 for his research on the relationship between Heart Sounds and Music. He is one of the main characters in “River of Fundament”, a Matthew Barney film about Norman Mailer (2013-14 release).

WILLIAM PARKER
Composer and bassist William Parker was born 10 January 1952 in Bronx, New York, USA. As Steve Greenlee of the Boston Globe stated in July 2002, “William Parker has emerged as the most important leader of the current avant-garde scene in jazz”. He is working in many of the more important groups in this genre, some of the most prestigious being his own, i.e. The Inside Songs of Curtis Mayfield, Little Huey Creative Orchestra, In Order to Survive, William Parker Quartet, Raining on the Moon and other groups. Mr. Parker is one of the most important composers in our time period, he is also a poet whose words are beginning to be heard in various media: in print, in song and in his theatre piece, Music and the Shadow People.

As a bassist, Parker is possessed of a formidable technique, albeit an unconventional one. Unlike a great many jazz bassists, Parker was not formally trained as a classical player, though he did study with Jimmy Garrison, Richard Davis, and Wilbur Ware and learned the tradition. Parker is one of few jazz bassists who regularly plays arco. He also plays several other instruments from around the world, including the West African kora.
http://www.williamparker.net/

PATRICIA NICHOLSON
Patricia Nicholson, dancer, poet and organizer of movement, music and causes – has developed her work within the aesthetic of free jazz.  The use of composition and improvisation has been influenced by this consistent relationship.  Combined with extensive technical background, Ms Nicholson has developed her unique approach drawing freely from traditional and non-traditional techniques to create an eclectic approach to intuitive movement and choreography.  She has taught both here and abroad and her work has been seen at festivals around the world. -Sound moves across our physical bodies, interfacing upon a universal dreamscape till we imagine & dance the possibility that changes everything.