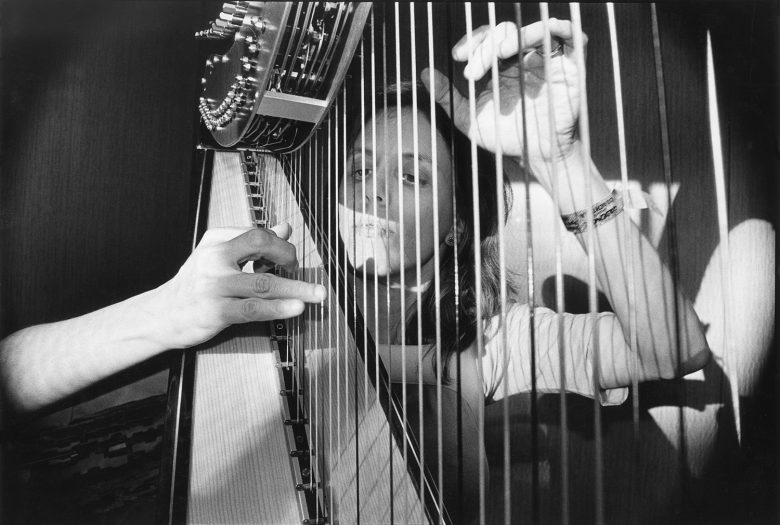 The acclaimed electro-acoustic composer and harpist Zeena Parkins returns to Roulette to present a concert in two parts.

Ekstasis I (Season 2) marks the beginning of a series of public presentations inspired by the work of Bay Area artist Jay DeFeo. For this performance Megan Schubert (voice/objects) joins Parkins (electric harp, bells + bowls/environment sounds, fixed and dislodged media), to navigate a topography of erasure by accumulation, revealing clues of the Sisyphean tasks of a working artist: layered, carved, scraped, incised, molded: the between to be collapsed.

“…Hopefully, even the most literal works transcend the definition of the objects from which they are derived.” — Jay DeFeo

Parkins returns to Roulette with her trio Green Dome: Ryan Sawyer (drums, feedback) and Ryan Ross Smith (piano/electronics/feedback) Parkins (acoustic harp/objects/feedback) with Lace_Mvt IV. In the piece, eight lace pieces serve as scores for this new addition to LACE, a long-term project that started in 2008.

“Lace exposes the knot and loop as central refrains, congealing time in the mise en abyme of thread…transposing the non-transposable.” — Jenn Joy

Roulette’s Winter season will be presented virtually and available for free on a variety of streaming platforms. Our theater is currently closed for public performances as a result of the Covid-19 pandemic and the safety measures that Roulette has put in place to keep staff, artists, and the public safe.

New York-based electro-acoustic composer/improviser /educator, Zeena Parkins is a pioneer of contemporary harp practices. Through the use of expanded playing techniques, object preparations, and electronic processing she has helped to re-situate and re-define the instrument’s capacities. Concurrently, Parkins self-designed a series of one-of-a-kind electric instruments. She leans into the harp’s physical limitations pushing into its impossibilities. In her compositions, Parkins utilizes collections, lists, recombination, historic proximities, geography, tactility, and movement. Sonic presence, history, and personality is revealed in feedback, overtones, timbral shifts, gestural intervals, perception, and residues. Honors include a Guggenheim Foundation Fellowship in Composition, a Foundation of Contemporary Arts Fellowship to Artists, a Doris Duke Artist Award, and three New York Performance Awards for her work with dance (“The Bessie”). Parkins holds the Darius Milhaud Chair in Composition, at Mills College. Parkins is excited to announce the release of Glass Triangle, a new trio with Ryan Sawyer (drums) and Mette Rausmussen (sax/objects) on Relative Pitch Records. With beautiful cover art and notes by artist Josiah McElheny.

Ryan Ross Smith is a composer, performer, sound designer, engineer, and educator currently based in upstate New York. Smith has performed throughout the US, Europe, and the UK, and has had his compositions performed throughout North America, Iceland, Denmark, Australia, and the UK. He has presented his work and research at various international conferences and is known for his work with Animation Notation [animatednotation.com]. In addition to Green Dome, current projects include Ross Farwell/IDM/Breakbeat, Sequential Switch/daily modular synth project, and a series of remotely produced duets with collaborators from around the world.

Ryan Sawyer, San Antonio born, Brooklyn-based musician/drummer. Sawyer learned his craft thru his early exposure to not only rock and jazz but the colloquial conjunto, zydeco, and punk rock music of his hometown. At 19, he recorded the influential first record with At The Drive-In. He moved to New York in 1997 to further his interest in improvised music where he has been leading a balanced life between composed and improvised performance. Sawyer has worked with such diverse names as Charles Gayle, Meshell Ndegeocello, Marshall Allen, Tara Jane O’Neil, EL-P, Rhys Chatham, TV on the Radio, Boredoms, Thurston Moore, Nik Zinner, Josephine Foster, Cass McCombs, Trevor Dunn, Mekons, Scarlet Johansson, to name a few. Presently, Sawyer performs solo and is in Gang Gang Dance, Nate Wooley’s Colombia Icefield, and Seven Story Mountain.

Megan Schubert has sung music by Stockhausen for an audience under umbrellas in a torrential downpour for Make Music New York; world premieres at Carnegie Hall; with robots while locked inside a Van de Graaff Generator at Boston’s Museum of Science; on a bike flying by the audience in an installation piece at McCarren Park Pool, Brooklyn; in a giant potato sack while video was projected onto here frontside at Webster Hall; for inmates at a maximum security prison in Ossining, NY; with puppets at E.4th sTree Fab! Fest; for Elliot Carter at a celebration of his 100th birthday; from behind the bushes in Dijon, France for entre cours et jardins; in an opening act for Jazztopad; in film soundtracks and onscreen; and shared with many ensembles championing art music and experimental jazz of today. She was a long-time assistant to the late Moog synthesizer pioneer and composer, Gerhson Kingsley.

The LACE PROJECT has been funded by the Doris Duke Artist award. EKSTASIS is being supported by the Guggenheim Foundation Fellowship in Composition.