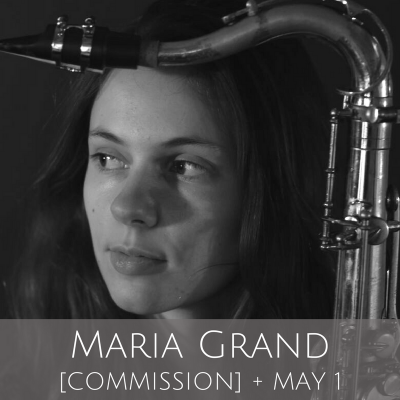 I’m a professional liver. I live for a living. When I’m on stage playing music, when I’m rehearsing, teaching, practicing, composing, serving my own vision or someone else’s, I feel very much alive. I feel excited. Sometimes I want to pinch myself – am I really doing this for a living? Can life be this good? Some of my favorite moments on stage are listening to my colleagues. Whenever I hear music something happens inside me. I’ve always been very drawn to it, but recently it’s becoming pure joy and I’m very much excited about the prospect of dedicating this life to being a sound vehicle.

I love cats; I’m a pretty lovey dubby person. I’m really into my family and my friends, especially my mother; I like to hang out with people.

I study communication and take a course that’s called human validation; it’s basically like radical group therapy. I’m interested in everything that makes this world a better place and connects us to ourselves and each other. It’s amazing how much better you can understand other people when you learn about how we communicate. This is all tied into music, because music is just another language; another expression; another possibility to convey love and all the other emotions.

My beloved dance teacher Noemí Lapzeson passed away a few weeks ago. She was my first female mentor. She was a master at her craft, and studying with her really made me understand how far you can go with an art form. I met her when I was a very young child, and I connected with her because she was an Argentinian woman living in Switzerland, and I was born in Switzerland from an Argentinian father. She was a treasure, a world of expression, just a gigantic jewel. When she died I was heartbroken and my vocalist friend Ganavya Doraiswamy started researching her art, trying to find ways to create meaning out of what was happening. She found a piece that’s entitled Combines, and that features Noemí, my teacher, and Celeste Dandekar, an Indian and British dancer. We both felt drawn to this. Then Ganavya had the idea to do a project around that piece, to pay homage to Noemi. I said yes; she gave me permission to use the idea for this commission at Roulette. So I started creating this multimedia work that’s loosely based on Noemí’s dancing, and that will be a musical tribute to her movement quest.

The people working with me are Ganavya Doraiswamy; Joel Ross, a vibraphonist; and Rajna Swaminathan, a mridangam artist. I’ve known them separately for many years, and now we get to express something together. With them I know I can go anywhere, they’ll follow me fearlessly. And so, we are expanding our art, to welcome the spirit of Noemí.

The second part of the evening will be my album release. The album is called Magdalena; it talks about the feminine, what was hidden during years of patriarchal dominance, and the beautiful mystery that remains under the layers of misunderstanding. This will feature my band DiaTribe, with David Bryant on piano, Rashaan Carter on bass, and Jeremy Dutton on drums. I am very excited to be bringing all these things out of my ears and into the world.

My father playing an Argentinian song called Tonada Del Viejo Amor, it made me cry so much. And then, singing with my parents at a concert on the lake in Geneva. I kept wondering why they repeated this one section of a bolero so many times; I’m sure it made sense, but at the time I couldn’t figure out why we were repeating it, and I was upset; it stuck with me because I really cared about music even at that early age, and I wanted to understand what was happening. One of my strongest early musical memories is playing in the street with my father. Music was everywhere. I used to ask my mother to play a Billie Holiday record to put me to sleep, and it made me cry sweet tears every time. Also, singing late in the night in my room, before going to sleep. When I stopped my father would come to the room and ask me to keep singing.

What is your favorite Roulette memory?

I took my crush, years ago, to hear Muhal Richard Abrahams. It was wonderful. The musicians were reading aloud from newspapers during the show. Everything was very new to me. I didn’t know you could write music like that.

What is the best way to spend an afternoon in New York City?

I like going to the Cloisters or to the Russian Baths. But there’s also the Met — the section on Egypt is my favorite, and behind the museum there’s an actual obelisk. You can go see it and feel it, it’s called Cleopatra’s Needle.

These days I think a lot about the marriage of listening and playing; offense and defense; the inner and outer worlds. I’ve come to the conclusion (so far) that they’re all the same. When I speak and when I listen I’m basically doing the same thing because deep inside there’s the witness that sees it all. But then the witness has a lot of humor and so maybe it’s active? I’m not sure. I’m looking for an underlying principle that is beyond active and passive. That’s what I try to think about when I’m creating music because at some point I discovered that a lot of times I was lacking deep listening – and when I started listening to myself, quite a few times I didn’t like what I heard. When I put more energy on listening than playing while I’m actually producing sounds, I find that things come out better, because it brings me a kind of detachment that actually allows for things to flow.

What are you really excited about right now?

I’m really excited about so many things every day. Life is exciting. I love creating new projects and having the freedom to imagine things and making them real. Lately a very exciting thing in my life has been working with Alicia Hall Moran. Watching her creative process and participating in it is some of the most rewarding work I’ve done. I did a short run with her and the band Harriet Tubman, and I learned so much. I really appreciate the opportunity to learn from anyone who is more experienced than me and who has paved the way in this music for lots of other people to walk through. It’s a very special thing. So one thing that I’m really excited about is paying tribute to my elders; to my community; and of course, the very first elder Mother we all are in debt with is Mother Earth.

Brooklyn, NY – For her Roulette-commissioned piece, saxophonist, vocalist, and composer María Grand offers an exploration of sound and movement in a tribute to her childhood dance teacher, Noemí Lapzeson. Inspired by Lapzeon’s split screen dances, Revés/Rêves: Dreams of a Departed Maestra presents movement as an instrument and uses the placement of musicians on stage to create intentional spaces of sonic expression. The second part of the evening will celebrate the release of Magdalena, a new album by Grand’s band DiaTribe. Magdalena explores modern familial relationships through the lens of Egyptian and early Christian myths, connecting them to the pioneering work of family therapist Virginia Satir.

María Grand was born in Switzerland in 1992, to a Swiss mother and an Argentinian father. Since her move to New York in 2011, she has become an important member of the city’s creative music scene, performing extensively in projects with musicians such as Vijay Iyer, Craig Taborn, Jen Shyu, Steve Lehman, Aaron Parks, Marcus Gilmore, Jonathan Finlayson, Miles Okazaki, etc. Her debut EP “TetraWind” was picked as “one of the 2017’s best debuts” by the NYC Jazz Record. María is a recipient of the 2017 Jazz Gallery Residency Commission and the 2018 Roulette Jerome Foundation Commission.

Revés/Rêves: Dreams of a Departed