Taking place February 13-16, Mixology Festival 2018: Circuit Breakers presents four evenings and seven musical artists and ensembles who bend, blend, and extend electronic instruments and tools toward new realms of creative communication. Surreal songs, ritual roustings, radiophonic phenomena, and a multimedia mélange will incite, inspire, and inhabit. Active for over 25 years, Roulette’s Mixology Festival celebrates new and unusual uses of technology in music and the media arts. Primarily a snapshot of current activity, Mixology strives to reflect both the history and trends of innovation that impact the Zeitgeist.

Roulette: Please describe the Ondioline Orchestra, and how you came to take on this challenge?

Wally De Backer (Gotye): The Ondioline Orchestra is an ensemble dedicated to reviving and extending the legacy of Frenchman Georges Jenny’s pioneering electronic musical instrument, the Ondioline. The instrument dates back to the 1940s but offers expressive and timbral possibilities that I think are still unsurpassed in many ways. I love the late Jean-Jacques Perrey’s playing of the Ondioline dearly (the love of his music led me to meet the man over the last few years of his life), and I thought it was a shame that the instrument has been almost completely forgotten after he explored it virtuosically in the ’50s and ’60s, so the Ondioline Orchestra was put together to showcase a number of fully restored Ondiolines as well as Perrey’s wonderful music. I’m honoured to play with five incredible New York musicians, from a dynamite rhythm section comprising alumni of one of my favourite bands, Zammuto, as well as renowned theremin and synthesizer maestros Rob Schwimmer and Joe McGinty.

Roulette: The history of the instrument and its makers and users is fascinating. Tell us about your research and who helped you along the way.

Gotye: Meeting Jean-Jacques Perrey was a dream come true for me, being such a big fan of his recordings for many years. Getting to know him personally over a number of visits to his home in Switzerland led to me becoming an archivist of his music, photos, and scores. This led to the release of an archival compilation of his early, rare and unreleased works with the Ondioline on a label I set up called Forgotten Futures. The record is called Jean-Jacques Perrey et son Ondioline and it features some sublime pieces I thought deserved to be heard not just by Perrey’s existing fans but by a wider listenership, so delicious are the melodies, and deft the timbral experiments he recorded with his Ondioline over the years.

I’ve received a lot of assistance with my research from Jean-Jacques’ daughter Patricia, as well as the daughters of Georges Jenny. They’ve been incredibly generous with their time and energy.

It would be impossible for me to have learned how to play the Ondioline, or for the Ondioline Orchestra to play at all actually, if it weren’t for the technician Stephen Masucci who has spent countless hours restoring the Ondiolines I’ve collected, often transforming them from rusty relics into beautiful musical instruments with full “original” functionality. The dedication he has made to reviving this very misunderstood and difficult-to-fix instrument inspires me greatly.

I’ve also been blessed to meet an incredible designer named Mike Buffington, who has deftly and painstakingly recreated the first ever English versions of a number of historical Ondioline documents that were originally published by Georges Jenny in French in the ’40s and ’50s.

So it’s truly a team effort to bring this instrument and a lot of lost work around it back to some attention. 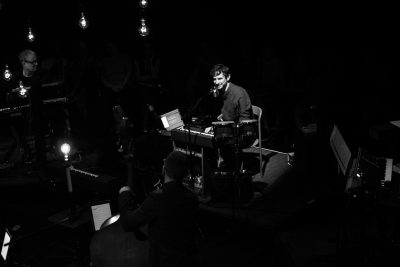 Roulette: You have said the Ondioline is a uniquely expressive electronic instrument. How is that?

Gotye: The Ondioline has a wonderful confluence of mechanical mechanisms to allow the musician to play very expressively. The left hand or right knee control a lever that allows the player to shape the overall envelope of the sound. This alone allows you to whisper gently in higher frequencies, or to overdrive the instrument’s great-sounding tube amplifier to bring forth great fat bass tones.

The keyboard can be moved from side to get a manual vibrato that is remarkably musical. I’ve played other electronic instruments that offer vibrato on their keyboard, from Yamaha’s ’70s monster organ-synths, to more contemporary expressive controllers like the Roli Seaboard, and they can be very good if you develop a high level of technique on them, but there’s something about the fine vibrato that’s achievable with wood and copper of the Ondioline’s keyboard that I find really magical, a true joy to play!

Finally, I just love the sound of the Ondioline. The little switches it offers on its front can be combined together, or switched on and off while playing with your other hand, to make an astonishing array of timbres, very changeable and just very pleasing to the ear.

Roulette: Who would you ideally like to collaborate with and why?

Gotye: I look forward to continuing to collaborate with people I already work with, as I feel there’s still so much more to explore. Whether that’s musicians in the Ondioline Orchestra, or my brothers in The Basics (though it might be a while for us to make new things since my current projects in New York require so much time and energy). I would love to work with the incredible thereminist Carolina Eyck sometime. We’ve done a little recording together, but I’m excited to see if maybe someday we could work on something original with theremin and Ondioline together- I think they would be interestingly complementary instruments.

Roulette: What artists inspire you, living or dead, in any medium?

Gotye: Balint Zsako, living. Also, I prefer to be living in order to be inspired by him and his work, which inspires me in every medium he addresses.

Roulette: What is it about Roulette that makes you want to show your work here?

Gotye: I loved Suzanne Ciani’s show that I attended there and I’ve always thought the programming is diverse and adventurous. I think the space has a great feel, and I’m excited to play in-the-round in the middle of the beautiful wood floor. I think it will make for a wonderful intimate setting for this music. Also, I live just up the street, so I can ride my Ondioline straight down the hill.

Brooklyn, NY — The opening night of Mixology Festival 2018: Circuit Breakers features an intimate celebration of the artist Jean-Jacques Perrey and the Ondioline, an early electronic keyboard instrument invented by Frenchman Georges Jenny, organized and performed by Australian pop artist Wally De Backer aka Gotye. Performed in the round, with direct sightlines into the intricate playing of the instrument, the program will offer a rare opportunity for fans of early electronic pop music to celebrate Perrey’s inventive studio work in a live environment.

Wally De Backer, better known by his stage name Gotye, has wandered many and varied paths in over 20 years making music. From playing drums and singing in Australian rock’n’rollin’ three-piece The Basics in places as far flung as Pannawonica, Western Australia and Shibuya, Japan, to writing, recording and releasing his first Gotye albums entirely independently (including hand-making the packaging for hundreds of individual records), he is happy to be described as “hands on” with his projects. In 2006, his self-released second album Like Drawing Blood was voted by influential Australian radio station Triple J’s listenership as its favorite longplayer of that year. In 2012 his album Making Mirrors won the Grammy Award for Best Alternative Album and the single from it, “Somebody That I Used To Know,” was awarded Record of the Year.

Mixology Festival 2018: Circuit Breakers presents four evenings and seven musical artists and ensembles who bend, blend, and extend electronic instruments and tools toward new realms of creative communication. Surreal songs, ritual roustings, radiophonic phenomena, and a multimedia mélange will incite, inspire, and inhabit. Active for over 25 years, Roulette’s Mixology Festival celebrates new and unusual uses of technology in music and the media arts. Primarily a snapshot of current activity, Mixology strives to reflect both the history and trends of innovation that impact the Zeitgeist.