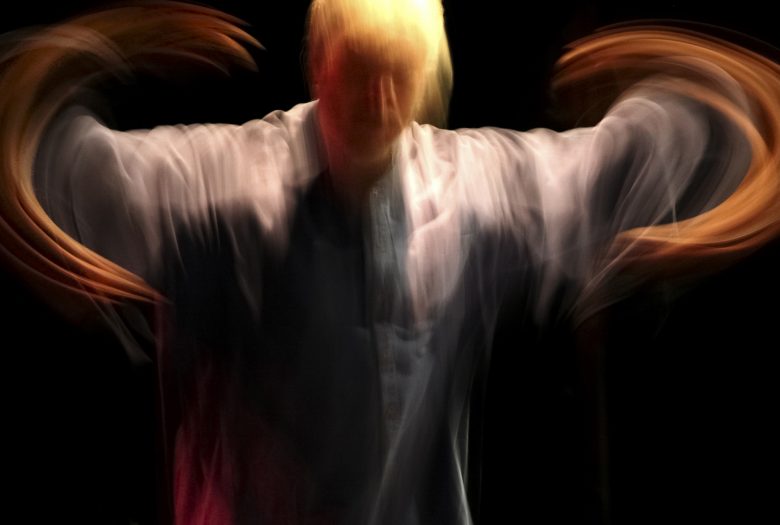 Since 2001 Adam Rudolph has conducted both Los Angeles and New York based versions of Go: Organic Orchestra a 15 to 30 piece woodwind, brass, strings and percussion group including concerts with special guest performers Yusef Lateef, poet Saul Williams and hand drum legend, Big Black. The group was chosen by the LA Weekly as “Outstanding World Music Group” in both 2003 and 2005. He has also conducted the Go: Organic Orchestra concept with locally based musicians in both Europe and South America.

About the music Rudolph says: “My overall concept in music is concerned with the evolution of improvisational art. The music I compose is thematic material which provides context and inspiration for improvisational dialogue: it is designed to structure creative landscapes of syncretic and multi-arts disciplines. My music materials consist, among other things, of original melodies, textural gestures, music languages, tone rows, traditional and synthetic scales, diadic and intervalic harmonies, call and response, polyphony, dynamics, and the coloration of silences. Forms are generated through my concept of “Cyclic Verticalism”, whereby polyrhythms, as used in African music, are combined with rhythm cycles, as used in Indian music.

In concert, I conduct the musicians in a spontaneous way, using music/letter grids, language themes, Indian ragas and original song forms to create moods, motion, and sonic gestures. The orchestral concept is to generate unusual relationships of sound against sound, form against form, and rhythm against rhythm in a non-linear, ever shifting kaleidoscope of music images, weaving what I call an “audio syncretic music fabric”.

The music is “organic” in the sense that the compositions and conducting exist as an inspiration and context for the musicians to express themselves by using their instruments as an amplifier for their inner voice. Performers are given the freedom to use their imagination and listening ability to develop the compositions within their own individual motion and timing, while still relating to the overall form and their aesthetic and musical functions.”

Composer and Artistic Director Adam Rudolph has constructed music using innovative and experimental means without the use of western music notation. Rudolph will conduct the woodwind players through music/letter grids, language themes, Indian Ragas and song forms to create the moods, movement and sonic gestures.

The percussionists have been learning Rudolph’s rhythm concept:”Cyclic Verticalism”, whereby polyrhythms (used in African music) are combined with rhythms cycles (used in Indian music). Utilizing these elements in an spontaneous way, elements will weave what Rudolph calls an “audio syncretic music fabric” that serves as a platform for improvisation and self expression. About this approach Rudolph states:

The Orchestra is made up of many of leading performers as well as young developing musicians. “I conceived of the Organic Orchestra as an opportunity to work with many musicians I have not had a chance to perform with before, as well as a workshop environment where I can share with younger musicians some of the knowledge I have received over the years from my mentors.” says Rudolph.

“I was fortunate to have attended two nights with Adam Rudolph’s Go
Organic Orchestra at Roulette a few months back
and was blown away by Adam’s distinctive blend of
jazz and world music as well as his conducting. ”
-BLG for DMG NEWSLETTER FOR JANUARY 25th, 2008