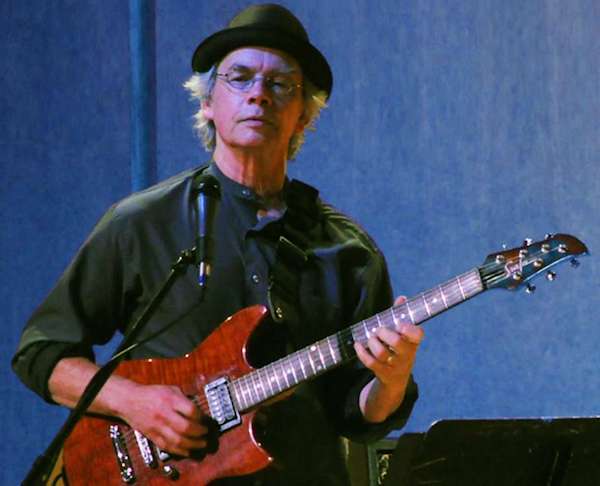 “For those of you who didn’t know my brother Philip, he passed away suddenly of heart failure on March 30, 2005 at the age of 44. He was an inspired writer, director, actor, dancer, choreographer, and a man who deeply loved many kinds of music. He was generous and kind, playful and curious . . . dramatic and impassioned. He had the largest group of extremely close friends of anyone I’ve ever known. I had been wanting to write something as a tribute to him, and honestly was pretty much unable to for quite a while. At some point, I began hearing the beginnings of new compositions that felt in some way related to Philip. I started putting these together and the resulting mix is a collection of folk, jazz, funk, and improvisational works that have come out of the enormous range of emotions I’ve felt since his death, and though they are not “his music” they have been influenced by him nonetheless. I’m delighted to say that we will be joined by Brian Thorstensen–compelling and wonderful writer and playwright–and Philip’s treasured friend Brian will be reading some of his writing for Philip with music accompaniment.” -Bill Horvitz

Bill Horvitz stretches the boundaries of guitar music and points it in new and exciting directions. Horvitz fuses traditional and extended techniques in a most inventive way; his strikingly personal instrumental vision endows the music with an infinite array of tonal color. His long and varied experience in the realms of jazz, rock, classical, folk, and new music have resulted in an entirely original compositional voice–a voice that is forceful and innovative, yet always intelligently accessible.

He currently leads the Bill Horvitz Band featuring Steve Adams on woodwinds and Harris Eisenstadt on drums. He also works with the improvising quartet Out by Five with Jon Raskin, George Cremaschi, and Garth Powell , the Harris Eisenstadt Ahimsa Orchestra, and Moe Staino’s Moekestra! He has recently recorded the CD Tuolumne Songs, compositions for solo acoustic guitar. His latest project is TONE BENT, a vocal and guitar collaboration with composer and singer Robin Eschner, features original songs as well as covers, often twisting old favorites in new ways.

Horvitz collaborates frequently with poets and other writers, combining electric and acoustic music with spoken word. He composed the music for the theater piece Circus Proboscis: A Sneeze of Freaks and the films DamNaged and Gravity Hill and has created music for dance and art installation .