“Crash” an opera by Robert Ashley

“Crash” an opera by Robert Ashley

“Crash is an opera for six voices and a three-person photo-projection score. The opera lasts ninety minutes and is played in six short, continuous acts. Crash is about a man, unidentified, but clearly an older man—the man-subject. We learn of his attitudes and his prejudices. We learn about his history as a member of a certain economic and social class.

Crash has three very different singing Characters. One Character is a person singing as if speaking on the telephone; that is, with the particular, brief intimacy that comes in phone conversations. The singer is trying to explain three important ideas: 1) the powerful cycles measured in number of years, “The Seven Ages of Man,” that drive us; 2) the problem of being small in our society; 3) neighbors and the problems we sometimes have with them.

The second Character is a person singing in a detached, deliberate style, as if reading a classic poem. The text describes a peculiar physical and mental problem the man-subject has.

The third Character is reciting, very briefly, the important events and ideas the man-subject has lived through. This singing Character has an almost unnoticeable vocal tic, a kind of rarely heard stutter. (This vocal tic is from the composer’s personal experience.)

The six singers rotate through the three Characters over the six acts. Thus, each singer will be heard portraying each of the three Characters once. This technique will highlight for the audience the unique vocal qualities of each singer, as in the aria technique in traditional opera. The three singers not singing as characters in any particular act sing as a vocal “orchestra” to accompany the three soloists. The music of the opera is entirely vocal.

Throughout the opera there will be three simultaneous, but not synchronized, projections of photographs depicting vast, beautiful landscapes. The technique of the photo-projection is intended to allow the audience to hear the singing and the texts without typical visual distractions, creating an ideal situation for a special kind of meditation.” —Robert Ashley 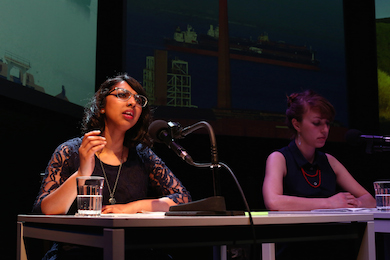 Robert Ashley (1930-2014), one of the leading American composers of the post-Cage generation, is particularly known for his work in new forms of opera. In the 1960s, during his tenure as its director, the ONCE Festival in Ann Arbor presented most of the decade’s pioneers of the performing arts. With the legendary ONCE Group, he developed his first large-scale operas. Along with Alvin Lucier, Gordon Mumma, and David Behrman, he formed the Sonic Arts Union, a group that turned conceptualism toward electronics. Throughout the 1970s, he directed the Center for Contemporary Music at Mills College, and produced his first opera for television, the 14-hour Music with Roots in the Aether, based on the work and ideas of seven influential American composers. In the early 1980s the Kitchen commissioned Ashley’s Perfect Lives, the opera for television that is widely considered the precursor of “music-television.” Stage versions of Perfect Lives, as well as his following operas, Atalanta (Acts of God), Improvement (Don Leaves Linda), Foreign Experiences, eL/Aficionado and Now Eleanor’s Idea toured throughout the US and Canada, Europe and Asia during the 1980s and 1990s. A new group of operas was begun in 1999 when Kanagawa Arts Foundation (Japan) commissioned Dust, which was quickly followed by Celestial Excursions and The Old Man Lives in Concrete. He wrote and recorded his performance-novel, Quicksand (released in novel form by Burning Books). His final opera, Crash, was completed in December 2013 for premiere at the 2014 Whitney Biennial Exhibition.