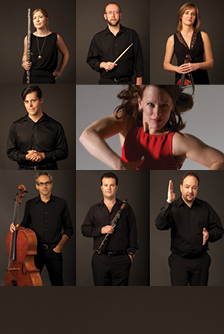 “Ms. Mazzini, a true, sensual dancer feels everything. Her rare intensity has long emitted a palpable spark from the stage. Watching her over the years has been a gift. She brought real emotion back to modern dance.” –The New York Times

American Modern Ensemble (AME) is a dynamic, creative force in the American new music scene, noted by The New York Times for its “first-rate” performers and “strong fan base,” coupled with “exceptional energy” (MusicWeb International). Founded in New York City in 2005 by violinist Victoria Paterson and house composer Robert Paterson, AME celebrates and showcases American music, with a focus on living composers. The ensemble is especially devoted to presenting the widest possible repertoire to audiences outside the contemporary music field, regularly presenting premieres, and conducting three annual competitions for young, emerging and professional composers. The group has performed and premiered over 150 works by living American composers in venues ranging from Lincoln Center to Galapagos Arts Space. AME is committed to connecting audiences directly with those composers: 90% of composers whose work has been programmed by AME have attended the concerts and joined in lively discussions, including John Luther Adams, Chen Yi, John Harbison, Aaron Jay Kernis, Steven Mackey, Christopher Rouse, Paul Moravec, Peter Schikele, Steven Stucky, Joan Tower and David Del Tredici. AME is the ensemble-in-residence at the CUNY Graduate Center in NYC. In 2009, American Modern Recordings was formed as the in-house record label, which will have worldwide distribution through Naxos by 2014.
americanmodernensemble.org

The Mazzini Dance Collective was created in 2011 by the distinguished dancer Annmaria Mazzini as a platform for showcasing her choreography and collaborating with other extraordinary artists in the fields of dance, music, film, and art. Annmaria’s original modern dance works explore universal themes of love, loss, desire, and triumph, celebrate the human spirit, and serve as a mirrors between the performers and audience, uniting us in a transcendent and magical exchange of energy, and ultimately affirming that none of us are alone. Annmaria formed MDC after a luminous career as a principal dancer with the Paul Taylor Dance Company from 1999-2011.
MazziniDanceCollective.org

In a golden age of new chamber music, Ear Heart Music is a trusted source for post-genre creative collaboration. A showcase of highly talented and adventurous performers, composers, and collaborative artists, Ear Heart Music is a modern chamber music series for modern ears. The series formed a partnership with Roulette in 2012 and continues to present dramatic and engaging multimedia events in this ideal venue September through June.

Hailed by Time Out New York as “a staple in the New York new music soundscape,” since September 2009, Ear Heart Music has produced over 75 unique concerts with over 60 world premieres. Its thoughtfully-designed programs highlight recent masterworks to stimulate creative thought and instill new avenues of perspective in the listener. The consistent level of intelligent and inspiring music-making resonates in the mind and body. Shows include electronic processing, performance art, visual art, film, and dance, providing deeper context for the music. Unique artist pairings, diverse programming, and the integral incorporation of new work, all contribute to Ear Heart Music playing a major role in reshaping the chamber music landscape for the 21st Century.
earheartmusic.org
facebook.com/pages/Ear-Heart-Music/116316791738457