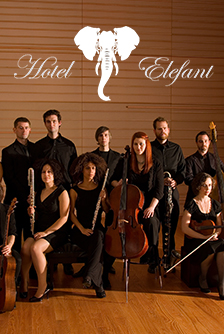 Ear Heart Music opens its second season at Roulette with Hotel Elefant performing music inspired by themes of extremities, brilliance, and shadow. The concert features music by Richard Carrick, including the world premiere of Prisoner’s Cinema, commissioned by the ensemble. Carrick’s large-scale chamber work takes its title from the psychological phenomenon, whereby people who only see the same color for long periods of time (such as those in solitary confinement, meditation, or self-assigned isolation), begin to hallucinate due to an extreme lack of visual contrast. Carrick says he is “fascinated with the idea of extreme consistency leading to wild and conflicting imagery.”

Other works by Carrick on the program include the intimate la scène miniature and “á cause du soleil” Flow Trio from his acclaimed Flow Cycle for Strings. On the topic of Light and Dark, these smaller pieces are based on the scene in Albert Camus’s L’etranger when Mersault is standing on the beach in the blinding sun, and the heat and light overwhelm him into murder.

“Hotel Elefant seems to be carving out their own niche, combining style, versatility, and quality of performance. They are well on their way to becoming a resounding force in the new music world.” –I Care if You Listen

Kirsten Volness is a composer, pianist, and educator. Volness enjoys collaborating with a myriad of contemporary ensembles, writing music for others to play (Colorado Quartet, NOW Ensemble, and REDSHIFT) and performing with groups like Hotel Elefant, Erik Ehn’s Tenderloin Opera Co., and Awesome Collective. She resides and teaches privately in Providence and works with the non-profit Boston New Music Initiative.

Composer Leaha Maria Villarreal brings a contemporary focus to classical music. With works written for dance, opera, and the concert hall, Villarreal’s output includes the electro-acoustic solo The Warmth of Other Suns for violinist Andie Tanning Springer, The Bell for Waking/The Bell for Sleep premiered by the JACK Quartet, and A Window to a Door commissioned by Experiments in Opera. She has worked with organizations and ensembles such as W4, the Composers’ Voice concert series, the Boston New Music Initiative, BODYART, and the PUBLIQuartet. Villarreal holds a B.A. from the University of California, San Diego and an M.M. from New York University.

Hotel Elefant is a contemporary music ensemble dedicated to the works of innovative, living composers. Formed in 2011 by composers Leaha Maria Villarreal and Mary Kouyoumdjian, Hotel Elefant ambitiously presents new music through commissions, performances, and moderated discussions between composers, performers, and audiences. Committed to modern sounds and sonic explorations, this vibrant ensemble brings a keen awareness of today’s music to the general public and highlights those living composers who are blurring lines, pushing boundaries, and fostering creativity.
hotelelefant.org

In a golden age of new chamber music, Ear Heart Music is a trusted source for post-genre creative collaboration. A showcase of highly talented and adventurous performers, composers, and collaborative artists, Ear Heart Music is a modern chamber music series for modern ears. The series formed a partnership with Roulette in 2012 and continues to present dramatic and engaging multimedia events in this ideal venue September through June.

Hailed by Time Out New York as “a staple in the New York new music soundscape,” since September 2009, Ear Heart Music has produced over 75 unique concerts with over 60 world premieres. Its thoughtfully-designed programs highlight recent masterworks to stimulate creative thought and instill new avenues of perspective in the listener. The consistent level of intelligent and inspiring music-making resonates in the mind and body. Shows include electronic processing, performance art, visual art, film, and dance, providing deeper context for the music. Unique artist pairings, diverse programming, and the integral incorporation of new work, all contribute to Ear Heart Music playing a major role in reshaping the chamber music landscape for the 21st Century.
earheartmusic.org
facebook.com/pages/Ear-Heart-Music/116316791738457