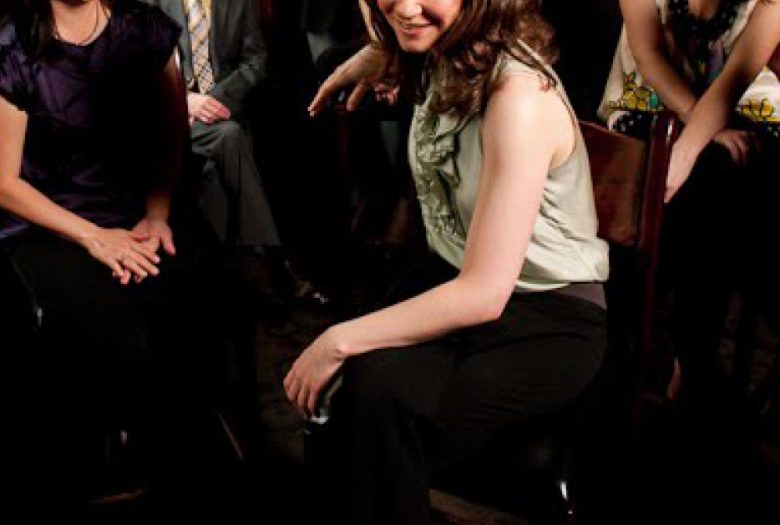 Grammy Award-nominated soprano Lucy Shelton, “a new-music diva if there ever was one” (The Boston Globe), join’s Philadelphia’s intrepid Dolce Suono Ensemble (DSE) for a program devoted to theatrical music with integrative drama.

This luminescent and meditative concert features the New York premiere of Jeremy Gill’s Ode: a dramatic cantata for mezzo-soprano, flute/piccolo, cello, and piano deals with the ecstasy of artistic creation. He sets the Seikilos epitaph from ancient Greece, the earliest extant example of written music, alongside texts from Mesomedes and Pindar to John Keats and Oscar Wilde. Pulitzer Prize-winning composer Shulamit Ran’s Moon Songs: A Song Cycle in Four Acts for Soprano, Flute (doubling Piccolo), Cello, and Piano, originally commissioned by DSE as a companion piece to Schönberg’s iconic Pierrot Lunaire, provides a beautiful compliment to Gill’s Ode. Ran brings together and illuminates culturally diverse texts on the moon from the Bible, Hebrew poetry of the Middle Ages and today, works from Elizabethan England, and a poem by Girod which Schönberg set in Pierrot Lunaire. She calls upon the singer to be like an actress and the instrumentalists to be dramatic protagonists, “embodying some of the myriad of ways in which, through poetry, myth, and fantasy, we as people have been struck by that gleaming, fantastical, mysterious vision we call the moon.” A video component will accompany these works, highlighting the texts within an atmospheric visual rendering.

“Shelton’s musicianship, technique, and intelligence are unfailing…” – The Boston Globe

“A whirl of activity fueled by intellect and passion!” – Creatively Speaking, WRTI

A showcase of highly talented and adventurous performers, composers, and collaborative artists, Ear Heart Music is a modern chamber music series for modern ears. “Embracing a landscape where cross-genre collaboration is not the exception or a special occasion but the rule and standard operating procedure, this contemporary chamber music series, organized by the flutist Amelia Lukas, keeps up its high ambitions with a season at Roulette full of new and recent compositions” (The New York Times).

Ear Heart Music “has become a staple in the New York new music soundscape” (Time Out New York). Its thoughtfully designed programs highlighting recent masterworks stimulate creative thought and instill new avenues of perspective in the listener. The consistent level of intelligent and inspiring music-making resonates in the mind and body. Shows include electronic processing, performance art, visual art, film, and dance, providing deeper context for the music. Unique artist pairings, diverse programming, and the integral incorporation of new work all contribute to Ear Heart Music playing a major role in reshaping the chamber music landscape for the 21st century.

San Francisco’s intrepid Del Sol String Quartet returns to Ear Heart Music with Peradem, an object that is revealed only to those who seek it. Del Sol searches for truth through the sonic aesthetics and emotions of Cambodia, Estonia, throat-singing and the night club. The program features New York premieres by Lembit Beecher and Mason Bates, with other recent quartets by Ken Ueno and Chinary Ung.