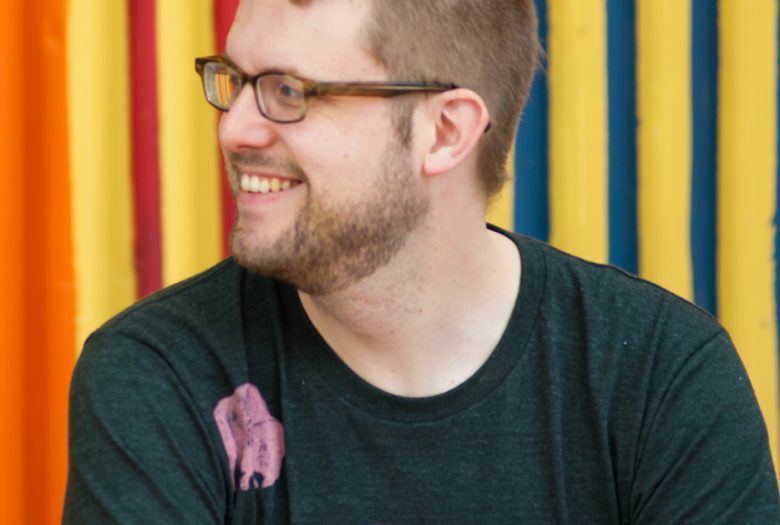 featuring Sam Pluta‘s Chain Reactions/Five Events and the world premiere of Robert Honstein‘s RE: you

Sam Pluta’s frenetically intricate Chain Reactions/Five Events for string quartet and laptop opens the concert with an epic and satisfying journey from fragmented noise improvisation to a fully notated mass of sound. Pluta brings his virtuosity at laptop performance and live sound manipulation to bear creating a quintet that seamlessly blurs the line between acoustic and electronic sound in a rewarding 25 minute build. Written last year for the stellar Mivos Quartet to premiere at the Lucerne Festival, this piece is a crowning example of Pluta’s signature style, demanding the quartet members to move fluidly from responsive improvisation to precisely notated ensemble playing.

Pluta says: “(About ten years ago), I was looking for ways to create semi-notated scores which created a kind of inevitability about the notation system, even though the music was largely improvised. Chain Reactions/Five Events is an extension of this earlier work. (In recent years), I feel that I achieved this “implied composition” more through software than notation. This piece is a merger of these different ways of working.”

The world premiere of Robert Honstein’s wordless song cycle RE: you completes the program and celebrates the album release of the same name on New Focus Recordings on May 27th. Inspired by a series of misdirected lonely-hearts emails,RE: you is a meditation on an individual’s experience of the universal desire for human connection cast in the backlit glow of a networked world. This epistolary cycle received its generating spark in 2008, when a friend of Honstein’s, Jeffrey K. Miller, was cc’d (in error) by a popular dating website on approximately 100 emails, both outgoing and incoming. Miller shared the correspondence with Honstein, and the two friends found themselves mesmerized by the yearning and hunger conveyed in these odd, naïve missives. Each song in the cycle takes its title from a line in the emails. Divorced from their original context the lines become elusive, strangely poetic phrases. They are oblique questions with no clear answers.

4. Better find those little blue pills if you plan on giving her more than lip service. (5:23)

At once, touching, relatable, original, and funny, Honstein’s brightly orchestrated and expertly crafted compositional style lends itself perfectly to the material.Honstein explains: “I found these emails to be hilarious, moving, and bizarre. Both the content and the strangeness of how they entered my life have led me to refer back to them again and again in my work. For these pieces I took the first line of eight emails and composed musical responses to each statement. Ultimately they became a set of songs without words, as much about my own obsession with the emails as with the emotional lives of the people behind them.”

The recipient of these communications, Miller, offers additional insight in the album’s liner notes, saying “That summer, as Robert and I read these messages, watching the font colors change, encountering strange new emoticons, witnessing a proliferation of maximalist orthography and punctuation not seen since the Vorticist movement (or a sixth-grader’s IM history), it was tempting to dismiss them for being ridiculous and naïve. And from the perspective of The Elements of Style, of course, they are. Nevertheless, that very same naiveté gave us access to an emotional life that was too human and too real to ignore. We had to admit that we were not only amused; we were also moved. Heard as a whole, these songs do not take us on the journey of a love affair, but on the journey of a longing for one. They trace the arc of a very real desire for something to happen. But for all their moments of excitement and absurdity, they never allow us to rise from the solitude of the desk chair, where the sound of the pounding heart is transformed by the fact that there is no one else around to hear it. This strange sensitivity that attends digital romance can be felt in every moment of these compositions.”

About Sam Pluta
Sam Pluta is a New York City-based composer, improviser, and sound artist. Known internationally for his laptop performances with groups like Rocket Science, Wet Ink Ensemble, and The Peter Evans Quintet, he has performed as a laptop soloist and chamber musician at the Lucerne Festival, the Donaueschingen Festival, the Moers Festival, Bimhaus, Porgy and Bess, and the Vortex, amongst other international concert venues and festivals. He was recently ranked as the top electronics performer in the El Intruso international poll of jazz critics. As a composer, he has been commissioned and premiered by Mivos Quartet, Yarn/Wire, ICE, Timetable Percussion, RIOT Trio, Dave Eggar, and Prism Saxophone Quartet. He is Technical Director for Wet Ink Ensemble, a new music group dedicated to promoting music by young composers. A devoted pedagogue, he teaches electronic music, history, and theory at Manhattan School of Music, has taught at the Computer Music Center at Columbia University, and is Academic Dean and Director of Electronic Music at the Walden School, a summer music program for creative musicians. Sam’s music is released on quiet design and Carrier Records, a record label he runs with Jeff Snyder and David Franzson, and his performances can also be found on More Is More, Tzadik, and hat[now]ART. Sam holds a Doctorate in Music Composition from Columbia University and additional degrees from UT Austin, the University of Birmingham (UK), and Santa Clara University.
www.sampluta.com

About Robert Honstein
Celebrated for his “roiling, insistent orchestral figuration” (New York Times) and “glittery, percussive pieces” (Toronto Globe and Mail), composer Robert Honstein (b. 1980) is a composer of orchestral, chamber, and vocal music. His works have been performed throughout North America by ensembles such as the Cabrillo Festival Orchestra, the New York Youth Symphony, the Albany Symphony Orchestra, the Woodstock Chamber Orchestra, Ensemble ACJW, Ensemble Dal Niente, the Mivos quartet, the Del Sol Quartet, Concert Black, TIGUE, and the Pittsburgh New Music Ensemble, among others. He has received an Aaron Copland Award, multiple ASCAP awards and other honors from SCI, Carnegie Hall, and New Music USA. He has also received residencies at Copland House, the Kimmel Harding Nelson Center, I-Park, the Bang on a Can Summer Institute, and the Tanglewood Music Center. Robert co-produces Fast Forward Austin, an annual marathon new music concert in Austin, TX and is a founding member of the New York based composer collective Sleeping Giant. Upcoming projects include commissions from cellist Ashley Bathgate, a consortium of pianists for a solo piano work, and a new work for Eighth Blackbird as part of a collaborative project with Sleeping Giant. He is also composer-in-residence, along with his Sleeping Giant colleagues, with the Albany Symphony Orchestra, as part of a Music Alive grant from New Music USA and the League of American Orchestras. He studied composition at the Yale School of Music with Martin Bresnick, Chris Theofanidis, and David Lang.
www.roberthonstein.com

About Concert Black
Concert Black is a Brooklyn-based trio that draws upon its members’ diverse musical backgrounds for their song writing, improvisation, and commissioning of today’s emerging composers. The group has fashioned an individual sound through surprising instrumental combinations: layered loops and bass harmonics are interwoven with flute melodies, punctuated by drums, and tied together with ethereal three-part vocals. In addition to their classical training, flutist Domenica Fossati is a veteran of the NYC Afrobeat and Indie Rock scenes (Underground System, The City and Horses), bassist/turntablist Lisa Dowling is an active hip hop DJ and singer/songwriter (Lil Miss Dolemite, kills to kisses), and percussionistOwen Weaver performs as an electro-acoustic soloist and rock drummer (MATA Interval Series, Glenn Branca Ensemble). Concert Black has been featured on music festivals and concert series throughout the country, including Contagious Sounds (NYC), Music With a View (NYC), Ear Heart Music (NYC), Berkshire Fringe (VT), and Color Field Festival (WI), in addition to the upcoming Wild Shore Festival for New Music (AK) and Fairbanks Festival (AK).
www.theconcertblack.com/

Ear Heart Music “has become a staple in the New York new music soundscape.”(Time Out NY) Since September 2009, Ear Heart Music has produced over 80 unique concerts with over 60 world premieres. Its thoughtfully designed programs highlighting recent masterworks stimulate creative thought and instill new avenues of perspective in the listener. The consistent level of intelligent and inspiring music-making resonates in the mind and body. Shows include electronic processing, performance art, visual art, film, and dance, providing deeper context for the music. Unique artist pairings, diverse programming, and the integral incorporation of new work all contribute to Ear Heart Music playing a major role in reshaping the chamber music landscape for the 21st century.

In a rare performance of Tan Dun‘s Ghost Opera for string quartet and pipa with water, metal, stones, and paper, new music veterans of the Momenta Quartet recall the haunting magic of Chinese peasant shamans. The composer describes this work as a reflection on human spirituality, too often buried in the bombardment of urban culture and the rapid advances of technology. Min Xiao-Fen, one of America’s leading pipa virtuosi, contributes her immense talent to the performance. To open the show, intrepid composer, improviser, and guitarist Gyan Riley pairs with Bang on A Can All-Star percussionist David Cossin (also a long-time collaborator of Tan Dun) for a set of structured improvisations based on motives from Tan’s rich score, highlighting the great nuances present in the work.
earheartmusic.org
facebook.com/pages/Ear-Heart-Music/116316791738457