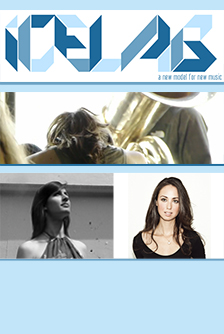 ICElab presents 2013 collaborators, Maria Stankova and Sasha Siem, at Roulette. Maria Stankova’s piece for 6 players employs algorithms and large-scale non-linear processes as a jumping off point for an experimentation with structure and multiple streams of perception. Her project will also explore the possibilities of listening that the combination of intuition and chance can engender. Sasha Siem’s evening-length song cycle features her remarkable vocal talents integrated with delicate orchestrations featuring seven ICE musicians.

Maria Stankova is a Bulgarian composer/vocalist/improviser whose works have explored the power of the human voice as an intermediary between meaning and sense, the visual representations of sound as a resource for creating flexible sonic objects and shapes, the possibilities of extended timbre, and the direct interaction between electronic and acoustic sound. Her work often incorporates the use of speech, movement, and interactive electronics with a strong emphasis on the physicality of sound production and the acoustic properties of space.
mariastankova.com