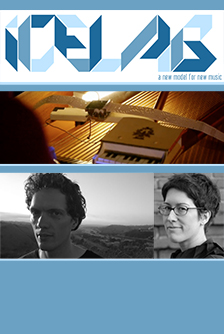 ICElab presents 2013 collaborators Martin Hiendl and Monica Duncan. Featured will be their ICElab 2013 commission, OFFSHORE, an ambitious piece for two percussionists, two trumpets, tuba, horn, electronics, and video. OFFSHORE deals with by the visual and sonic patterns of nautical communications while in passage between land and water. This passage is a danger zone, a space of shallow water, where ships barely skim the ocean floor and meticulously steer into port. Peril arises from our attempt to migrate between these two worlds.

Martin Hiendl was born and raised in the Bavarian Forest in Germany. His music involves both instrumental and electronic sources and examines large-scale processes and ecstasy. The short opera Erwartung und Traumverlust was premiered by the International Ensemble Modern Academy conducted by Beat Furrer. Hiendl’s music has been played throughout Germany and the U.S.
martinhiendl.com

Monica Duncan grew up in Webster, NY — around the apple orchards along Lake Ontario, the industry of Kodak and the tales of the Rochester Knockings. Her time-based work investigates the nature of visual and temporal perception through camouflage, stillness and the surrogate body. Duncan’s work has been exhibited widely thoughout the U.S. and Europe.
monicaduncan.net