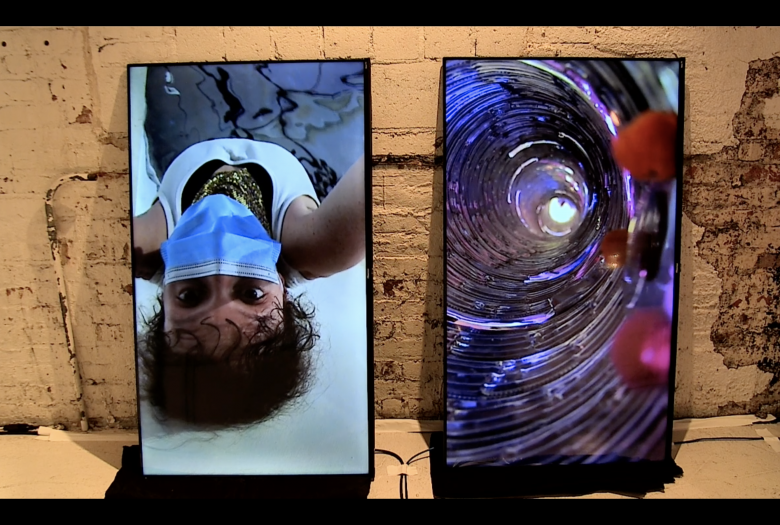 superposition, a new collaborative performance work by choreographer Laurie Berg and sound artist Karl Scholz, utilizes the unique acoustics of Roulette’s space to knit sound via an ever shifting speaker configuration. Changing modes makes for shifting nodes. Audience members will be invited to join the performers in experiencing the room from multiple perspectives.

Karl Scholz is an interdisciplinary artist and engineer working primarily with sound, code, and dance. His work straddles the worlds of performance and dance parties. In 2021 he created the Karlala Soundsystem — a bright pink stack of speakers and subwoofers powered by large solar batteries. The system has been used to hold space for dance events in NYC nearly every weekend since its inception. His work has been presented at the New Museum, the Whitney, Pulitzer Foundation, Trouw in conjunction with the Stedelijk museum, BAMPFA, and more. He runs the party Sweet Kicks along side Alicia Coleman (DJ Miss Alicia) and Kourtney Woodward (DJ Rose Kourts) and is the lead developer for PlantWave, a device that translates plant bio data into music.

Jodi Bender is a NYC-based performer/dancer who has appeared frequently in the work of Laurie Berg, Vicky Shick, and David Thomson (he his own mythical beast, Bessie Award for Best Production 2018). She has also collaborated with choreographers Rebecca Brooks, Rebecca Davis, K.J. Holmes, Sam Kim, Jillian Sweeney, and Tara O’Con amongst others, and shown her own work at Mondays at Roulette, THROW at The Chocolate Factory Theater, AUNTS, the Flic-Fest After-Hours Cabaret at Irondale and at Luis Lara’s Not Festival.

Matt Romein is an artist, designer, and performer based in Brooklyn, NY. His performance design work includes plural (love) by Haruna Lee + Jen Goma, Knot in My Name by Ita Segev, King by Neal Medlyn, Turning Towards a Radical Listening by James Sprang, and [50/50] old school animation by Peter Mills Weiss + Julia Mounsey. He has created visual and interactive installations that have been shown at Sundance’s New Frontier Program in Park City, Utah, IDFA’s Doclab in Amsterdam, and SXSW in Austin, Texas, among others. He has had artist residencies and received grants from Pioneer Works, Google, CultureHub, Signal Culture, NEW INC, NYU, and more. He is a full time faculty member at NYU’s ITP.

Thank you to everyone at Roulette! Jim, Amanda, Woramon, Caitlin, Stephe, Rebecca, Chantal, Ian and Ben. Thank you to the Chocolate Factory for time and space and so much more. Special thank yous to Jodi, Karl, Matt, Jay, Zelda, Amy, Meredith, Jillian, Bessie. Grateful to be here.

Laurie Berg and Karl Scholz: superposition is presented as part of DANCEROULETTE and is supported in part by the Mertz Gilmore Foundation, the Harkness Foundation for Dance, the National Endowment for the Arts, the New York City Department of Cultural Affairs, and through Roulette’s GENERATE program, providing over 30 artists each year with in-depth creative and technical support.