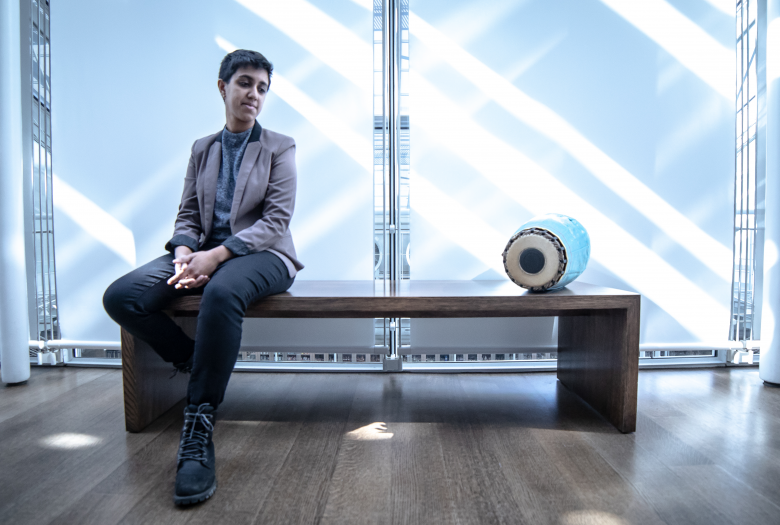 Mrudangam (South Indian percussion) artist and composer Rajna Swaminathan founded the ensemble RAJAS, which finds its namesake in the Sanskrit ‘rajas,’ referring to the inner energy that compels us toward action, creation, and change. The ensemble embodies this spirit in their exploration of new collective possibilities in the resonances among Indian music, jazz/creative music, and other improvisational traditions. The group will play a combination of new material and music from Rajna’s debut record with the ensemble, Of Agency and Abstraction (Biophilia Records, 2019). The Financial Times describes Rajna’s compositions for the ensemble as having “wedded beauty by courting chaos, with the methods of loose-knit latter-day jazz at the service of a recognizably South-Asian melody and pulse.”

Rajna Swaminathan is an acclaimed mrudangam artist and composer. She is a protegé of mrudangam legend Umayalpuram K. Sivaraman, and tours regularly with renowned Indian classical musicians and dancers, most notably vocalist T.M. Krishna. Since 2011, she has been collaborating with eminent musicians in New York’s jazz and creative music scene, experimenting with new possibilities at the nexus of multiple traditions and expanding the horizons of her instrument. In addition to the ensembles she leads, Rajna performs extensively in projects led by Vijay Iyer, Amir ElSaffar, María Grand, and Ganavya Doraiswamy. Rajna is currently pursuing a PhD in Music (Creative Practice & Critical Inquiry) at Harvard University.

María Grand is a saxophonist, composer, educator, and vocalist. She moved to New York City in 2011. She has since become an important member of the city’s creative music scene, performing extensively in projects led by or including musicians such as Nicole Mitchell, Vijay Iyer, Craig Taborn, Mary Halvorson, Jen Shyu, Aaron Parks, Fay Victor, Joel Ross, etc. María writes and performs her original compositions with her ensemble, DiaTribe; her debut EP “TetraWind” was picked as “one of the 2017’s best debuts” by the NYC Jazz Record and her full-length album Magdalena was praised by major publications such as the New York Times, Downbeat, JazzTimes, Billboard, JazzIz, and others. As an activist in the performing arts, María is a founding member of anti-discrimination group, the We Have Voice Collective. She has toured Europe, the United States, and South America, playing in venues and festivals such as Dizzy’s Club, the Jazz Gallery and the Stone in New York City, AngraJazz in Azores Islands, the Kimmel Center in Philadelphia, Roulette in Brooklyn, Porgy and Bess (Austria), Bird’s Eyes (CH), MassMoca in New Hampshire, JazzJantar Festival in Poland, Le Guess Who Festival in Utrecht (Netherlands), etc.

Miles Okazaki is a NYC based guitarist originally from Port Townsend, a small seaside town in Washington State. His approach to the guitar is described by the New York Times as “utterly contemporary, free from the expectations of what it means to play a guitar in a group setting — not just in jazz, but any kind.” Okazaki has released four albums of original compositions over the last 12 years and is an artist on the Pi Recordings label. He has also released a six album recording of the complete compositions of Thelonious Monk for solo guitar, published a book Fundamentals of Guitar with Mel Bay, has taught guitar and rhythmic theory at the University of Michigan for five years, and holds degrees from Harvard University, Manhattan School of Music, and the Juilliard School.

Young Steinway Artist, Indian pianist /composer Utsav Lal, known as the ‘Raga Pianist’ has set a precedent with his innovative handling of Indian Classical music. Recognized for his creative vision, the 26 year classical & jazz pianist has an impressive career  which includes solo performances at  global venues like Carnegie Hall-NYC, Southbank Centre-London,  Kennedy Center-Washington DC and extensive collaborative work with Irish, Scottish and Indian musicians. With his distinctively unique raga repertoire, Utsav Lal has often been the first on the programming calendar of well- known Indian Classical, Jazz, Silent Film & World Music festivals. Debut album release ‘Piano Moods of Indian Ragas” by label Times Music(2008), Utsav has five subsequent records released including a solo recording of ragas on the world’s first ever ‘Fluid Piano’, released by the Fluid Piano Tuning label ( 2016).Utsav’s unfailing clarity of technique and rhythmic virtuosity showcases itself in his rendition of ragas. Treading the careful line between an ancient tradition and the innate desire for innovation with utmost respect, Utsav Lal’s music is influenced by his guru Ustad Wasifuddin Dagar and also gains inspiration from a vast array of sources such as the Persian piano tradition, the work of Australian minimalist piano trio – The Necks and musicians who sought to expand the expressive capabilities of the piano like Ran Blake, Anthony Coleman, Tsegué-Maryam Guèbrou and Cecil Taylor. His music has a quiet intensity and is acclaimed for its sincerity and depth.