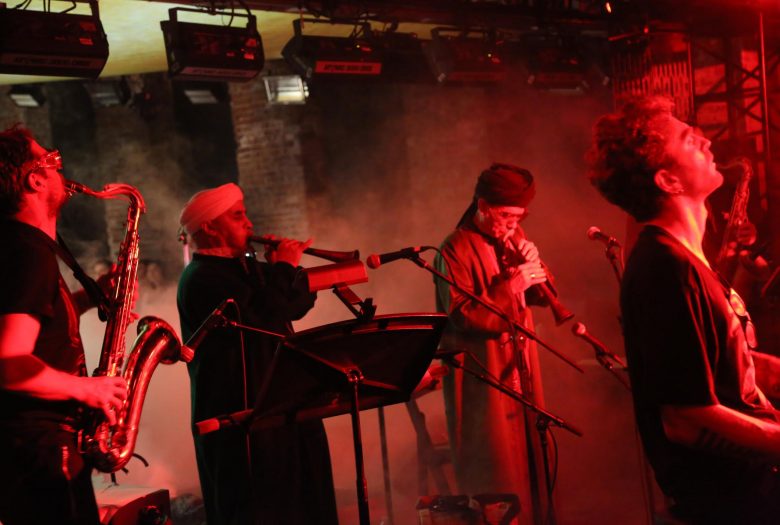 Inspired by the intoxicating sounds of the legendary Master Musicians of Jakouka, this ensemble of musicians from both sides of the Atlantic – Morocco and the US – explore the potential for sound to trigger a state of ecstasy. Bachir Attar is a multi-instrumentalist acknowledged for his mastery of the ghaita, a double reed oboe-like instrument that is fundamental to the sound of the Master Musicians of Jajouka, the group that he leads. His brother, Mustapha Attar, also a member of the group, plays drums as well as ghaita. Saxophonist and clarinetist Ned Rothenberg, acclaimed throughout the world for his solo concerts and collaborations with diverse musicians, is particularly noted for his virtuosity of multiphonics and circular breathing.  Arrington de Dionysio, a saxophonist, vocalist and visual artist who has collaborated recently with Attar and Mustapha, draws on a variety of traditions, including Tuvan throat singing and Indonesian trance music, for inspiration. Innovative percussionist Ben Bennett has developed a commanding synthesis of extended and traditional techniques on the drums, and worked with cutting-edge improvisers around the world.

The Master Musicians of Jajouka, from the Rif mountains of Morocco, are noted for their trance-inducing ceremony that predates Islam and is thought to evoke the ancient rites of Pan, the goat-legged fertility god of ancient Greece. The music of the Master Musicians has been described as “a firestorm of sound” (New York Times). Embraced in the 1950s by artist Brion Gysin and writer Paul Bowles, the village of Jajouka became a mecca in the 1960s & ‘70s for celebrities such as the Rolling Stones, Ornette Coleman, and Timothy Leary.

“The Master Musicians music is one of the great legal highs, a thundering, transporting chorale of undulating drones and shrill, ecstatic fanfares…”  Rolling Stone

“hypnotic…the music (of the Master Musicians of Jajouka) is an evocation of sustained ecstasy.” Newsweek