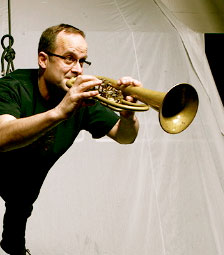 Rādia and Sonic Smithy at Roulette 2012

Rādia collaborates with select members of the Brooklyn based young people’s music workshop, Sonic Smithy.  The ensemble enthusiastically invites audience members and young people of all ages to bring their instruments and join in this collective, free-for-all, instant composition. Everyone is encouraged to participate, and all instruments, both traditional and home-made, are welcome. The crazier, the better.  Here is an incomplete list of examples of acceptable instruments: violin, trumpet, pieces of newspaper to rip, plastic bottles to crinkle, kazoos, percussion, toy xylophones, electronic beeping devices, cello, saxophone, and/or lute.

In 2010, violist, violinist, composer and educator Nicole Federici founded Sonic Smithy in Brooklyn, New York, with the dream that it could connect young musicians with the most innovative, original music of their time and place, and the living, master composers, bandleaders, and performers who are creating it right now. Throughout her career she has performed with some of the most adventurous pioneers in new music, including innovative conductor Butch Morris, drummer Matt Wilson, and the avant-garde saxophonist and composer, Andrew D’Angelo. In addition, she has performed and recorded with many other wonderful musicians including: Ray Charles, the Jupiter Symphony, Tracy Bonham, Marco Cappelli, Charles Burnham, Jason Kao Hwang, William Parker, Cornelius Dufallo, and Harry Connick. She is a founding member of the Douglass Street Music Collective, a group of Brooklyn musicians who created a unique and accessible venue, which promotes the performance of new compositions in jazz and creative music. She is also a board member of CBD Music, Inc., an organization dedicated to the development of the music of emerging composers and ensembles, the creation of new work, and exciting education programs which support awareness and connection with new music.

Andrew D’Angelo’s charismatic presence and iconoclastic musical ambition have been well established over the course of his twenty-year plus career and his key roles in bands like Human Feel, the Matt Wilson Quartet and Tyft. His dedication to pushing his limits and his willingness to delve into new musical areas have been powerful inspirations to his peers and to a new generation of improvisers. His forceful tone and aggressive improvisational style have made him one of the most influential alto saxophonists of his time.

“D’Angelo is an expressionist. On alto, he wields a visceral, heart-on-sleeve tone” – Jazztimes Magazine

“John Carlson is a magnificent trumpeter, able to move with equal grace in the realms of both Clifford Brown and Michael Ray….he displays a great improvisational command.”  Robert Spencer, Cadence Magazine, January 2000

Bill Ware is a quiet giant of the vibraphone with a tone not unlike Bobby Hutcherson. Mr. Ware defines the word “groove” when he cooks rhythms on a low burn while he feels where his fellow musicians are going, only to “strike out and impress with his four-mallet attacks of chords, cadences and arpeggios, surprising in every measure.”* Mr. Ware has performed, recorded and toured internationally with hundreds of artists, most prominently as a charter member of the internationally renowned jazz group The Jazz Passengers, which has featured guest appearances by Blondie star Deborah Harry, guitarist Marc Ribot and vocalist Elvis Costello. In the 1990s, Mr. Ware was at the heart of the New York City “acid jazz” scene with the popular band, Groove Collective. He toured with Steely Dan in the 1993- 1995 Alive in America concert tours as a member of the all-star band dubbed the “Steely Dan Orchestra”.