The sound and installation artist Cecilia Lopez was invited by Outpost Artists Resources to curate a festival that the Queens-based media arts center is co-presenting with Roulette on November 13 and 14, 2019 (11 artists, 2 days). Lopez spoke by telephone from Buenos Aires with Roulette Director of Special Projects David Weinstein to discuss what inspired her to take on the project.

What is the concept and context of the festival within the current art and technology scene?

When I was approached with the idea, the question was to curate a new media or a real time media festival that involved technology with live performances. All these terms raise questions, right? This is mostly what I do in my own work and I like the intersection of these things. That said, I find that there’s usually a little bit of an arms race aspect to it, in how people relate to technology and how its uses are imposed.

For me, technology is never neutral and lots of things are in play in the use of it. So I thought about who is using technology with a subject-based idea, like identity or experience or even simply what does technology mean? You know, it doesn’t matter how technical it gets. The question is more, what technology means for us, and what even constitutes technology? A piano is technology. Some people in the festival use very technical stuff and some do very artisanal things.

How did you select the work? Talk about a few of the artists and how their technology and approach fit the project.

I’m interested in concepts of precariousness and the organic even with electronics. Limitations are very freeing. So I’m trying to give a perspective on these questions. I chose work thinking about all this, which led to a wide range of people, which is interesting for me too. I was like, okay, this is cool. This works. For example, Amanda Gutierrez uses VR, and it’s a walk through a neighborhood with people that narrate their experience there so it’s not removed from our reality. It’s not abstract. The concept is at the service of something else. So, what’s that something else and how does that service happen? It’s about that interaction.

I’m interested in the complication of the subjective experience through mediation, layers; sort of like how we perceive our surroundings. I use the word mediation when there’s a distance, not removal, but a layer influencing the actual experience. Nao Nishihara builds machines but they’re very rudimentary and it’s old-fashioned in a way. So he’s less technological in terms of technique but the performance aspect creates a poetic interplay between the body and the mechanical. Ragnhild May builds clusters of wind instruments and wears them as an outfit and the visual/theatrical/sonic elements intersect with super technological stuff like algorithms and Arduino.

Aki Onda’s work addresses musicality and time and performance in a very particular way with simple means like glass bells and lightbulbs and projections. So again, it’s the layers between objects and actions that generate an augmented perception. Gil Arno will present an amplified customized projection machine that he’s built that generates pulsating images on an offstage screen, but watching him work is part of the experience.

What will the audience encounter that may surprise them?

The theater won’t be fixed in a typical auditorium format. There are things that require someone moving through the space. There are things that are more screen-based. It’s a traditional theater, and you can’t change the way it looks. But I feel like you can also use that dissonance in your favor to make it even weirder, you know? It sets up a contradiction, kind of like nonsense, which I’m interested in.

What do you hope emerges as the most valuable lesson or message from the festival?

Given the world we live in, I feel like being critical about the use of technology is sort of crucial and perhaps a way of questioning the system. I think a lot about these non-neutral aspects of technology and how the non-mechanical amplifies these questions. When things are not so normalized or not so standardized it brings them back to who made it, how did they make it, where…there’s lots of meaning in that for me.

Brooklyn, NY – Cecilia Lopez’s machinic fantasies is a performative installation based on the idea of producing a sonic and visual live “mediation process/machine.” The Roulette-commissioned work utilizes multichannel video and sound spatialization techniques to augment the audience’s perception of specific kinetic sound objects. Performers will hand-spin oil drums that have been transformed into revolving playback systems to amplify appropriated sound and field recordings, spoken word, and live acoustic/electronic instruments. Images of these sound objects will also be projected onto different screens, creating an immersive environment of synchronicity, and asynchronicity.

Cecilia Lopez is a composer, musician, and multimedia artist from Buenos Aires, Argentina. Her work explores perception and transmission processes focusing on the relationship between sound technologies and listening practices. She works across the media of performance, sound, installation and the creation of sound devices and systems.

Jean Carla Rodea is a Brooklyn-based vocalist, interdisciplinary artist, and educator, born and raised in Mexico City. She is dedicated to perform a plethora of music in a variety of settings -from solo to large ensembles. She has performed and recorded with Darius Jones’ vocal quartet Elizabeth-Caroline Unit, Gerald Cleaver’s Uncle June and NiMbNl quintet, Anthony Braxton’s Syntactical Ghost Trance Music Choir. In addition to this, she leads her own projects: AZARES, trio=tres nube.

Julia Santoli is a Brooklyn-based artist and experimental musician. Creating immersive and precarious environments with voice, feedback, electronics, and installation, her work deals with intergenerational hauntings and reclamation through the body. 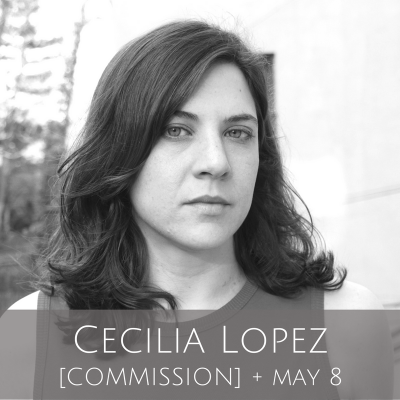