In this Dispatch, performance artist Elena Demyanenko discusses and previews her deeply collaborative work welter— originally scheduled to premiere at Roulette in June—and her interest in observing how work and engagement with art will now change and develop.

In welter, three simultaneous solos emerge out of prolonged work with color. The performers occupy a viscous dimension of saturated light, their submergence in which is total. Infected by color virus and noise making, they exhibit symptoms which evince something ancient and essential to emotional survival, complete with an extra-lingual mode of communication that is evocative of invocation, incantation. The performers do not surrender their agency; rather the spell endows them with a more evolved force unmediated by language. The resultant, feverish state enables a direct, non-abstracted, non-symbolic account of desire and its power.

Russian-born Elena Demyanenko (Dance Artist/Director) is a former member of both the Stephen Petronio Company (2003-2008) and the Trisha Brown Dance Company (2009-2012) and has been performing, teaching and choreographing in NYC since 2001. Her most recent multi-media project, echo/archive, premiered at EMPAC (Experimental Media and Performing Arts Center, Troy, NY) in the spring of 2018. Blue Room, made in collaboration with Dai Jian, and commissioned by New York Live Arts, was described in The New York Times as “luxurious” and “eloquently meticulous” (Kourlas). Demyanenko was a recipient of a Jerome Robbins Fellowship for the creation of Disparate Bodies with Joseph Poulson, which was choreographed at and subsequently premiered at the Baryshnikov Arts Center. Elena’s other works have been shown at many prestigious venues including Danspace Project (New York), Garage (Moscow), Movement Research at Judson Church, Dance New Amsterdam, Dixon Place, and at the Architecture of Movement Festival, Yaroslavl, Russia, among others. Also a maker of dance films, Demyanenko was the recipient of a Dance Movies Commission by EMPAC and was nominated for the Dance on Camera Jury Prize for her collaboration on Kino Eye. Demyanenko is a member of the dance faculty at Bennington College and is currently developing a new work titled welter – which will premiere at Roulette in June 2020. www.elenademyanenko.com

As part of our Roulette at Home digital initiative, Dispatches is a set of brief communications or small collections of new work from artists, sent directly to our community—a way to remain connected and engaged in a time marked by distance, isolation, upheaval, and change.

In our latest Dispatch, Roulette TV talks with 2020 Roulette Resident composer Mary Prescott about creating during a time of uncertainty.

Mary Prescott is a Thai-American interdisciplinary artist, composer, and pianist who explores the foundations and facets of identity and social conditions through experiential performance. She aims to foster understanding and create pathways for change by voicing emotional and human truths through artistic investigation and dissemination.

Prescott’s output includes several large-scale music-theater works, improvised music, an immersive multimedia chamber opera, a 365-day sound journal, and a film score for Salzburg Experimental Academy of Dance, as well as solo and chamber concert works. Prescott is a 2019-21 American Opera Projects Composers and the Voice Fellow, a 2019/20 Resident Artist at Roulette Intermedium (NYC), and a 2020 Lanesboro Arts Artist-in-Residence (MN). She has previously held residencies at Hudson Hall, Areté Venue and Gallery, Avaloch Farm Music Institute and Arts Letters and Numbers. In 2019, she was awarded a National Performance Network Creation and Development Grant, supported by the Doris Duke Charitable Foundation, the Andrew W. Mellon Foundation, and the National Endowment for the Arts; an Artist Initiative Grant and an Arts Tour Grant from the Minnesota State Arts Board. She has been commissioned by Roulette Intermedium (NYC, Jerome Foundation), Living Arts (Tulsa), Public Functionary (Minneapolis), Shepherdess Duo (Brooklyn Arts Council), Piano Teachers Congress of NY, and Duo Harmonia (MN State Arts Board). As Co-Founder and inaugural Artistic Director of the Lyra Music Festival at Smith College, Prescott was named a New York Foundation for the Arts Emerging Leader. She has served on faculty at the Goppisberger Music Festival in Switzerland, the Louisiana Chamber Music Institute, and is a Teaching Artist with American Composers Orchestra. Prescott holds degrees from the University of Minnesota – Twin Cities, and Manhattan School of Music.

As part of our Roulette at Home digital initiative, Dispatches is a set of brief communications or small collections of new work from artists, sent directly to our community—a way to remain connected and engaged in a time marked by distance, isolation, upheaval, and change.

Dutch avant-garde composer and performance artist Jaap Blonk performs an iteration of a recent piece at home in the Netherlands. His absurd multimedia work YappiScope with live visual accompaniment was originally included in Roulette’s 2020 spring season and has been postponed. Blonk’s latest recordings can be heard here and here.

As a vocalist, the self-taught Dutch composer, performer, and sound poet Jaap Blonk is unique for his powerful stage presence and keen grasp of structure, even in free improvisation. He has performed around the world, on all continents. With the use of live electronics, and sometimes projection of visuals, the scope and range of his concerts has acquired a considerable extension. Blonk has been performing since the early 70s and has worked with The Ex, Mats Gustafsson, Joan La Barbara, Michael Zerang, John Tchicai, Tristan Honsinger and many others. At the start, Blonk’s unfinished studies in mathematics and musicology mainly created a penchant for activities in a Dada vein, as did several unsuccessful jobs in offices and other well-organized systems. In the last decade, his renewed interest in mathematics made him start a research of the possibilities of algorithmic composition for the creation of music, visual animation, and poetry.

As part of our Roulette at Home digital initiative, Dispatches is a set of brief communications or small collections of new work from artists, sent directly to our community—a way to remain connected and engaged in a time marked by distance and isolation caused by COVID-19.

Roulette TV catches up with composer Simon Hanes, whose performance was originally scheduled for June, via video chat. Hanes talks about working virtually and finding new ways to make art that transfers the impression of proximity with collaborators that are apart.

Tredici Bacci — a 14-piece group of musicians all under the age of 30 — sounds, to the thoughtful listener, like a celebration. A celebration not of a genre of music, but rather of an era, and, more specifically, the aspects of an era which perhaps have been glossed over by conventional history. To that end, Tredici Bacci celebrates the strange, somewhat seedy, schmaltzy and smooth aspects of 1960s-70s popular culture. The songs are cries in honor to the many artifacts which seem now to be the strange leavings of a recently liberated nation — the sensuous oddities leftover from an entirely different world.

Over the last few years, young musician and composer Simon Hanes has worked tirelessly to channel his deep love and infatuation with 1960s / 1970s soundtrack music into his own personal vision and homage to the style through dedicated songwriting, and the integration of the totality of his musical influences. After graduating from New England Conservatory and spending time playing bass in the then-Boston-based No(ise) Wave unit Guerilla Toss, Hanes adopted the “Luxardo” persona as an arranger, composer, conductor, and guitarist, and went on to assemble a band of epic orchestral proportions. Consisting of close friends and fellow classically-trained musicians, the resulting band is the ambitiously sizable 14-piece Tredici Bacci. The band’s first full-length album, Amore Per Tutti, was released by NNA Tapes in November 2016. simonhanes.com

As part of our Roulette at Home digital initiative, Dispatches is a set of brief communications or small collections of new work from artists, sent directly to our community—a way to remain connected and engaged in a time marked by distance and isolation caused by COVID-19. 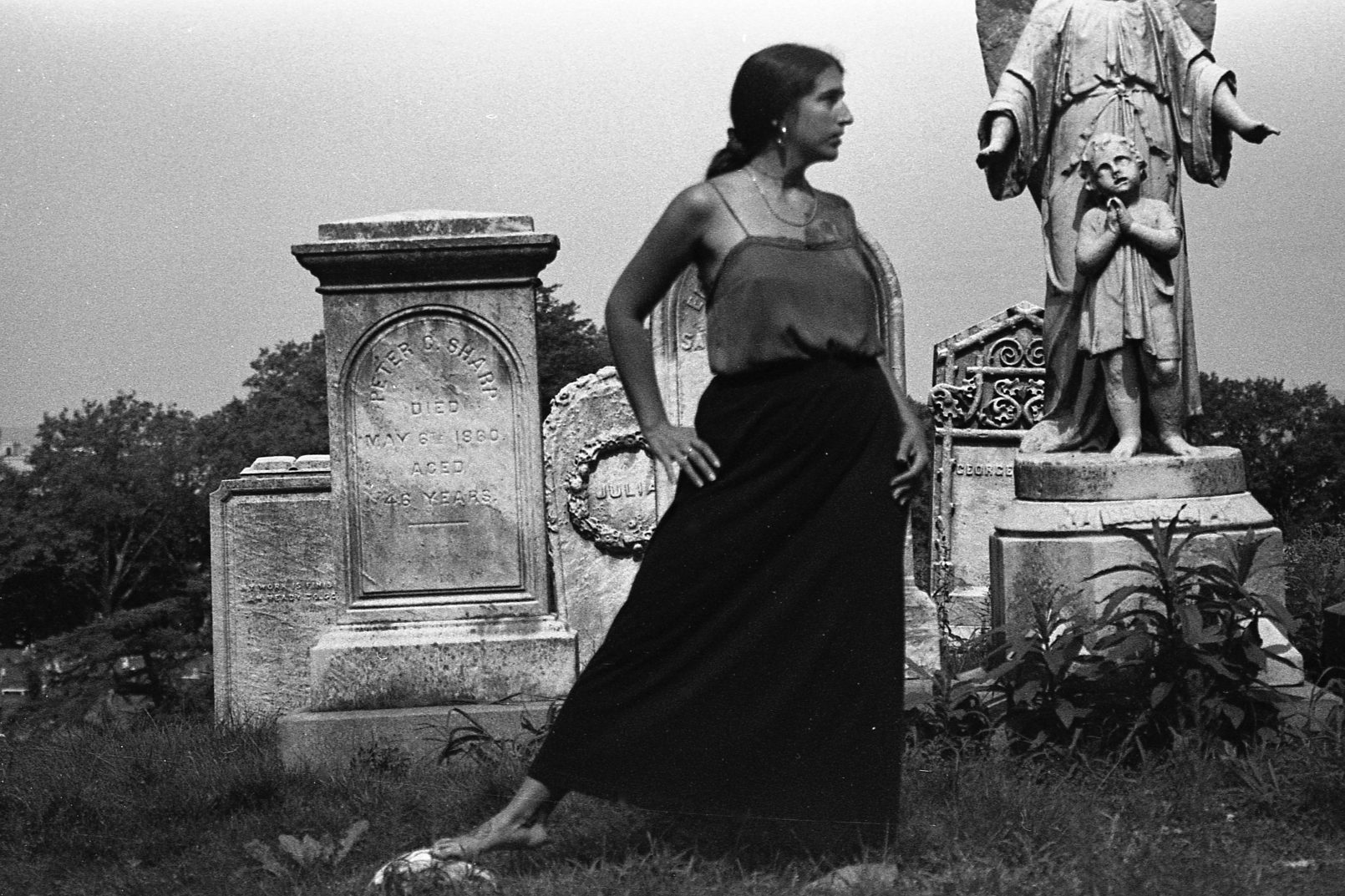 Muyassar Kurdi is a New York City-based interdisciplinary artist working across sound, performance, movement, visual arts, and film. Kurdi’s 2020 Roulette Commission Vast Geographies—a performance with bassist Luke Stewart based in ritual exploring ecology, movement in stillness, walking, embodiment, and sound as liquid architecture—originally set for April 22, 2020 has been postponed due to the pandemic.

Kurdi shares a series of paintings done in the midst of total isolation in NYC since mid-March. Kurdi notes, “I feel painting has been my main activity during quarantine because it’s meditative and deepens my exploration in color. Color has been really healing.” 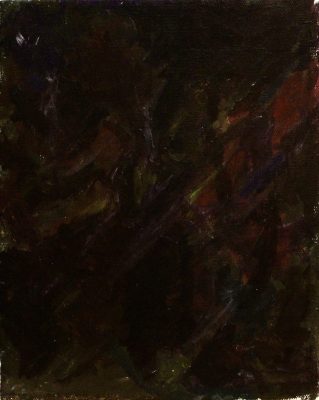 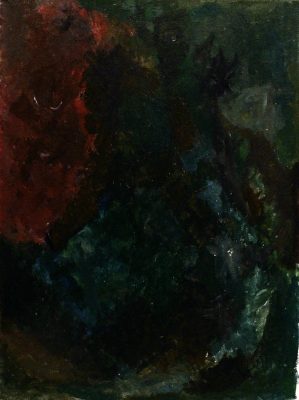 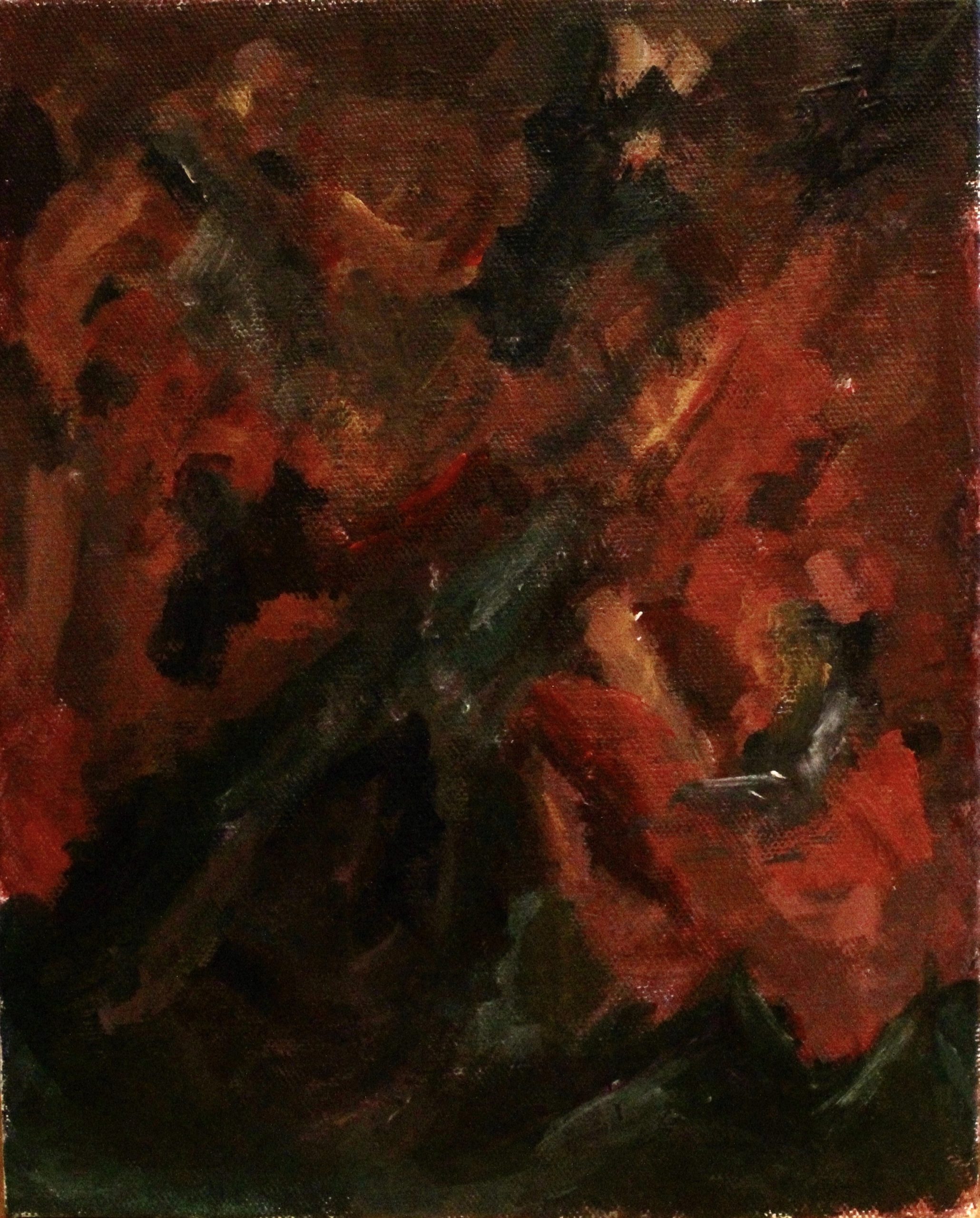 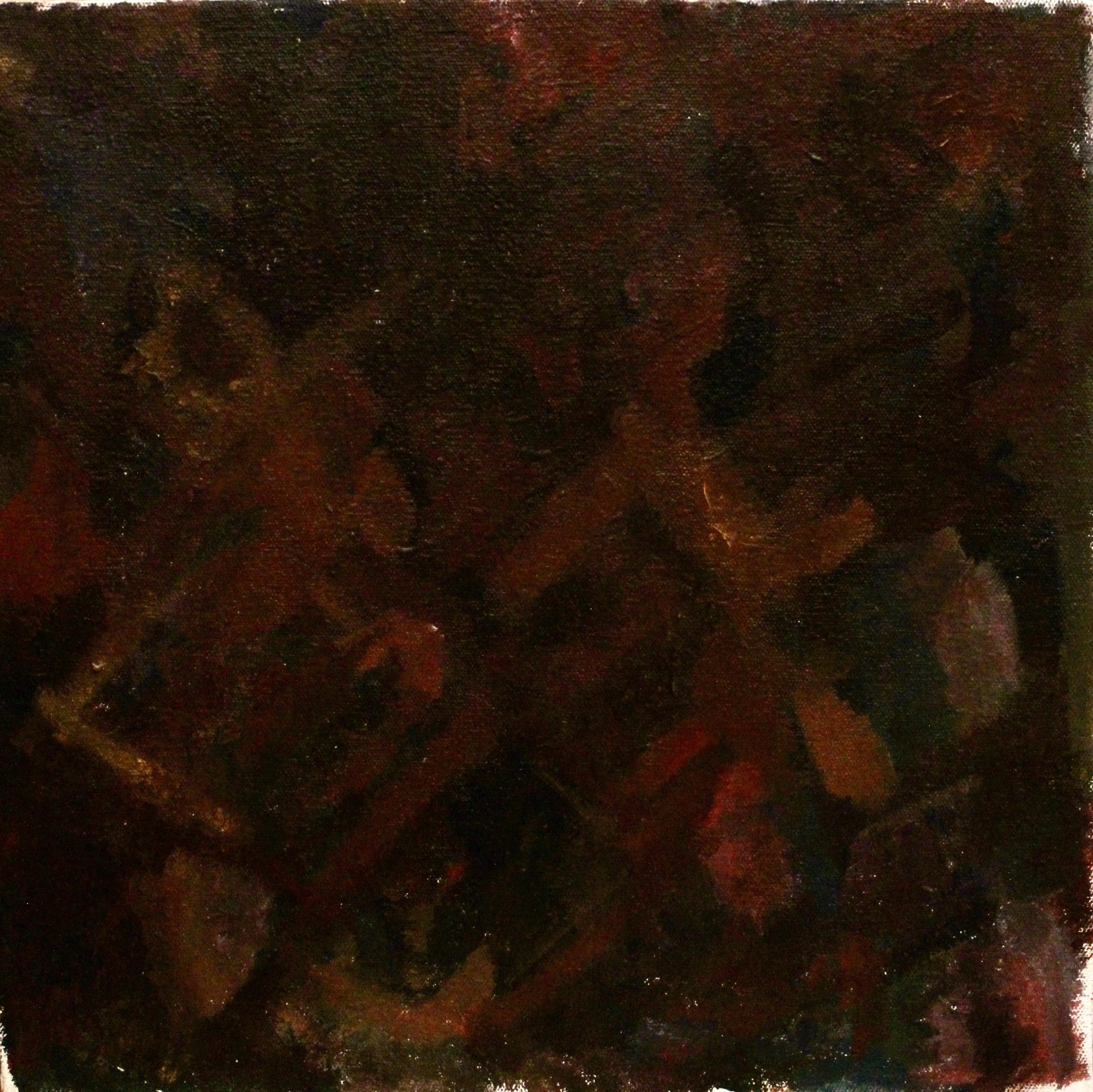 All painting from April 2020. 35mm film photo by Maren Celeste.

As part of our Roulette at Home digital initiative, Dispatches is set of brief communications or small collections of new work from artists, sent directly to our community—a way to remain connected and engaged in a time marked by distance and isolation. 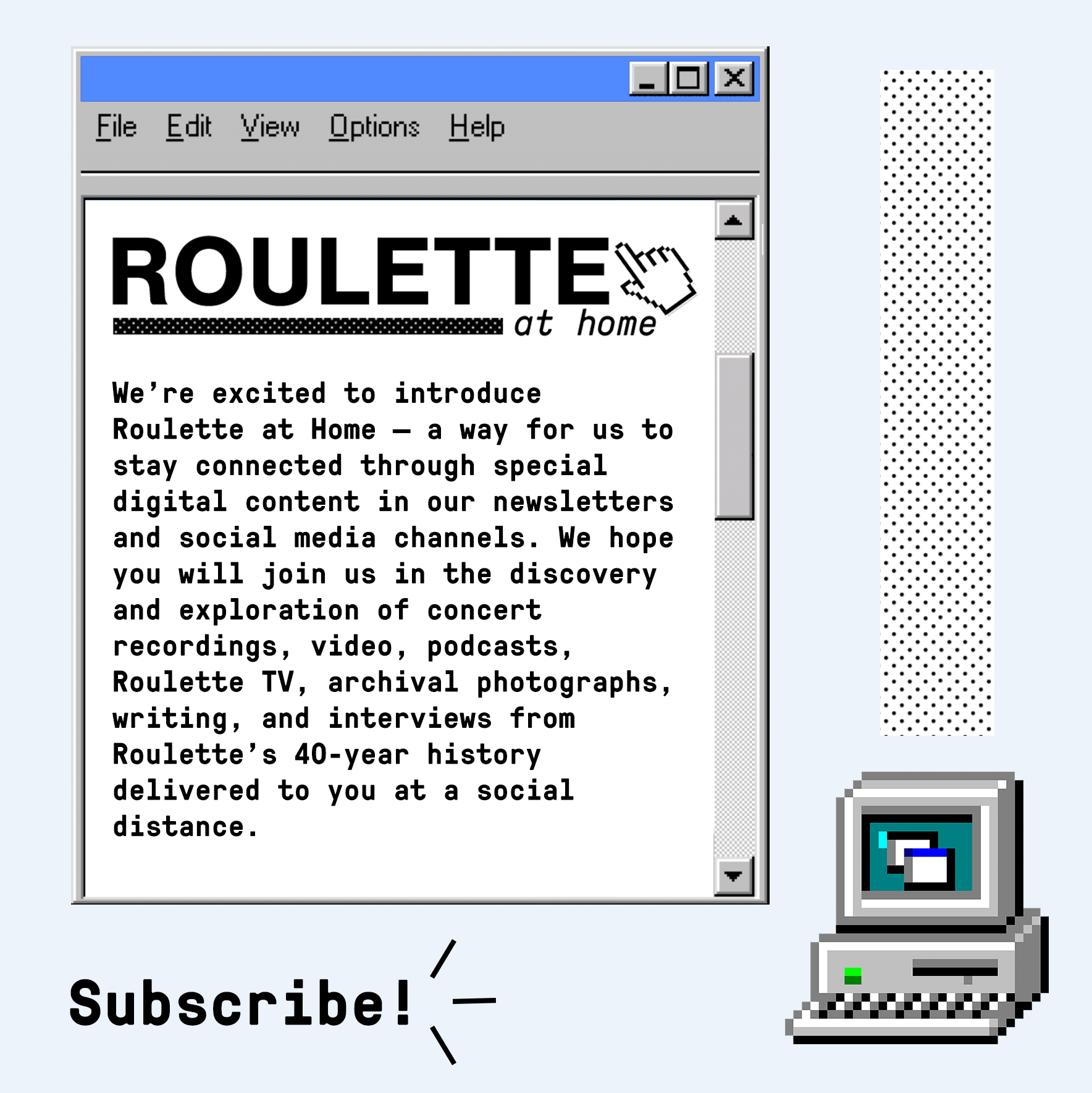 As we adapt to this challenging and unparalleled moment presented by COVID-19, our greatest priority is to keep everyone safe and healthy. As a result, Roulette has suspended its live programming for the time being. We hope to resume our Spring Season and welcome you back to our venue in mid-May (or as soon as officials and health experts advise that it is safe to gather). Read our official statement here.

In the meantime, we are excited to introduce Roulette at Home — a way for us to stay connected through special digital content in our newsletters and social media channels. We hope you will join us in the discovery and exploration of concert recordings, video, podcasts, Roulette TV, archival photographs, writing, and interviews from Roulette’s 40-year history delivered to you at a social distance.

We believe in the importance of art in difficult times and we remain committed to supporting and nourishing our artists and community. We will see you online, and hopefully in-person very soon.