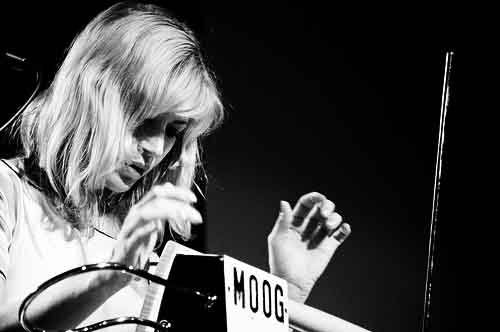 Suzanne Ciani is a five-time Grammy award nominated composer, electronic music pioneer, and neo-classical recording artist whose work has been featured in countless commercials, video games, and feature films. Over the course of her 30+ year career, she has released 15 solo albums, including the live electronic album retrospective, Buchla Concerts 1975. Ciani’s forthcoming collaborative album with Kaitlyn Aurelia Smith, Sunergy, will be released on September 16, 2016 via RVNG’s FRKWYS imprint.

New York based DJ, producer and electronics artist Antenes operates a laboratory of self-made sequencers and modular synthesizers. Tracing the lineage of synthesizer operation to vintage telephone equipment, her curious studio discipline of manipulating repurposed switchboards was fueled by the desire to breathe new life into long-silenced machines, transforming signal paths through which voices once travelled.

Vienna/Berlin-based artist E. Indigo reps an intelligent and distinguished interpretation of techno and electronic music. As a composer and musician, she creates music for concert spaces, clubs, and sound installations, emphasizing the spatial-temporal placement of subtly elaborated sounds and structures, often generated from speech recordings.