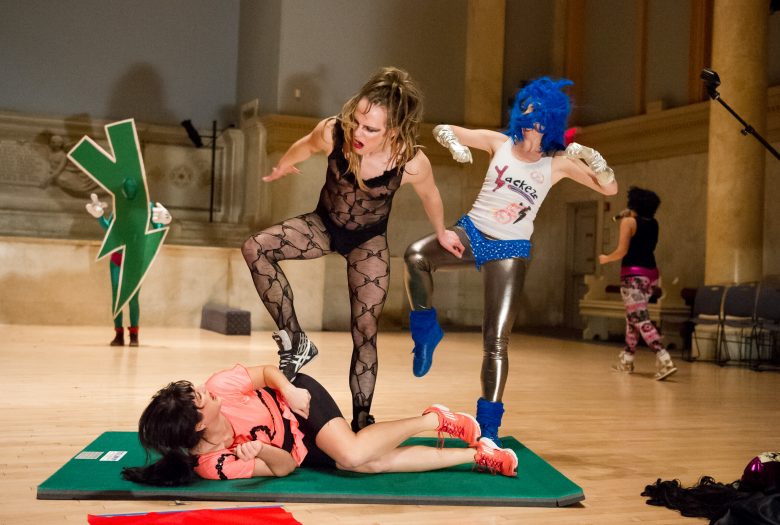 Shiny Angles in Angular Time is a new collaboration in progress between Renee Archibald and Melinda Ring. Renée Archibald is a dancer, choreographer, and Assistant Professor and Director of Dance at Whitman College. Originally from Maryland, Archibald earned her BFA in Dance at the University of North Carolina- School of the Arts, and then danced and choreographed independently throughout NYC for ten years before earning her MFA from the University of Illinois, Urbana-Champaign. She has performed throughout New York City, the United States, and internationally with independent artists including Christopher Williams, Ann Liv Young, Joshua Bissett, Nina Winthrop, and Rebecca Lazier. Her choreographic work has been presented at NYC venues including The Brooklyn Museum, The Chocolate Factory, Danspace Project, Dance Theater Workshop, and The Kitchen. She has received choreographic residencies through the Brooklyn Arts Exchange, Movement Research, and Yaddo and has taught at the Yard, White Mountain Summer Dance Festival, Barnard College, and the University of Illinois.

Moriah Evans presents a solo work in progress. Moriah Evans’ choreographic work has been presented at Issue Project Room, Danspace Project, the Kitchen, MoMA PS1, Judson Church, AUNTS, American Realness, BAX, New York Live Arts, The New Museum, The Chocolate Factory, Dixon Place, CalIT2, Kampnagel and Theatre de l’Usine. She is the Editor-in-Chief of the Performance Journal and has been involved with the publication since 2009. During her 2011-2013 residency at Movement Research, she initiated The Bureau for the Future of Choreography. She was a 2014 Artist in Residence at Issue Project Room. In recent years, she has had the pleasure to work with Trajal Harrell, INPEX, Tino Sehgal, Jerome Bel, Sarah Michelson and Xavier Le Roy. Her 2015 piece, Social Dance 1-8: Index was nominated for a Bessie award for the category Emerging Choreographer.

For the past four years, the art-pop band Yackez, comprised of husband and wife duo Larissa Velez-Jackson and Jon Velez-Jackson, has initiated improvisation-based performances with various dance collaborators. The dance study will center around YackMan, the band’s handmade foam-board mascot. In preparation for Yackez’s large-scale commission in 2016 at New York Live Arts, Yacktez will use Roulette as a platform to create a study of the movement possibilities and difficulties of their (un)trusty green gender ambiguous mascot.

Yackez is the arty rap group/multimedia collaboration of Larissa and Jon Velez-Jackson, aka Twitta and Papi Jon. This married art-pop duo exists as both a celebration and critique of popular culture, politics, urban mentality and most notably, itself. At times as only a duo and others times backed by various members of the Yackez family of dancers, they have performed at venues such as Judson Memorial Church, The Kitchen, Danspace Project, El Museo Del Barrio, the Bronx Museum of the Arts, Dixon Place, Galapagos Art Space, Philadelphia’s AUX Performance Space, Arts in Renaissance, Public Assembly, Chocolate Factory Theater, Abrons Arts Center, the Gershwin Hotel, Center for Performance Research, as well as numerous venues for the curatorial AUNTS collaborative. Larissa is a two-time veteran of Roulette.