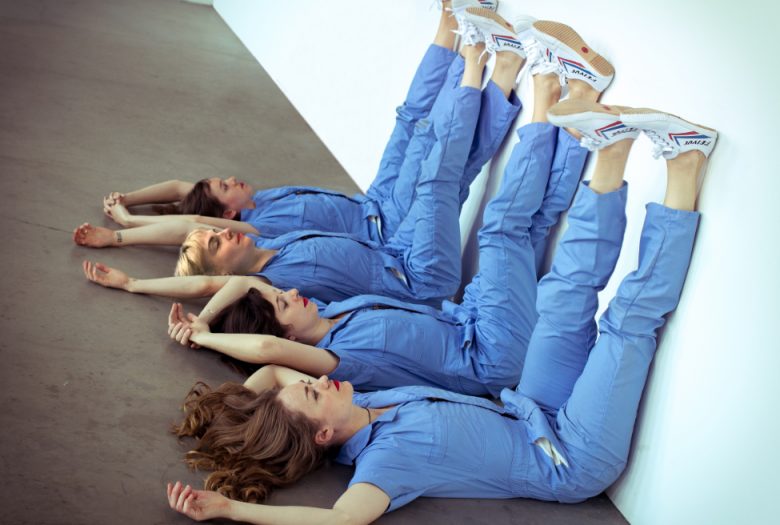 “Ferrum,” Latin for iron, is a site-specific work by Shandoah Goldman. Created while in residence at Pioneer Works in Brooklyn. Created in homage to the building’s original function as an iron factory, “Ferrum” illustrates Goldman’s continued exploration into contemporary performance in historical sites. Goldman gives herself Carte Blanche as she takes her creative process by storm to create works for both urban & rural landscapes, theatres, private events, and screen. As a Shiatsu practitioner and somatic educator for the past 17 years, Goldman thrives on interdisciplinary and cross-cultural collaboration.

“Not to get un-lost” performed by Sara White Ayon is a section of a larger accumulation of movement objectives intended to organize, reorganize, disorganize, and locate, re-locate, dislocate the space in and around a body. An artist working across the disciplines of dance/choreography/performance, video, sculpture, sound, and collage, Ayon’s work has been presented with various organizations and venues  including Movement Research at the Judson Church, SVA’s Visual Arts Gallery, and The Philadelphia Fringe Festival.

Kristopher K.Q. Pourzal
I’ll go to the end of time for you, in 15 minutes (and you don’t even know my name)
20 mins

Performativity and intimacy bump and grind like lovers and/or strangers in this solo performance by Kristopher K.Q. Pourzal. Through a series of neurotically/erotically repetitive episodes of song, text, and dance, he deals with the duality of the emotional experience of appearing to be one human in one body — the heartache of feeling separate and yet the empowerment of feeling singular — while flirting with the possibility of a timeless space within and beyond it all in which this illusion dissolves. A Brooklyn-based artist by way of Arizona, Pourzal has worked with Catherine Galasso, K.J. Holmes, and Will Rawls.