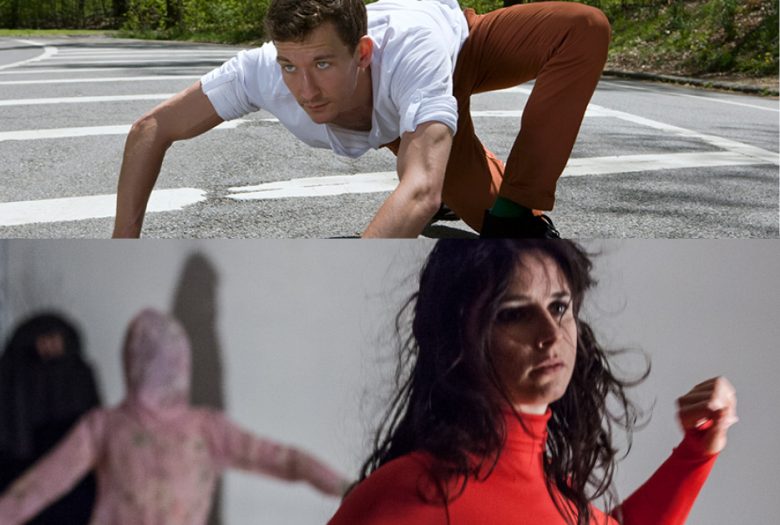 Dylan Crossman
Every Me Sees Thou a Little Differently
We are complex. We are multiple. Which one will shy away, take over or win? A story of our human complications.

Tara O’Con
Frame (A Work in Progress)
An evolving investigation on how to create an experience of watching live performance that is similar to how one might experience a film through the lens of a camera.

Dylan Crossman grew up under the Mediterranean sun and studied in rainy London (UK) before moving to New York. There, he was lucky enough to work with various choreographers including Peter Kyle, Wally Cardona, Sally Silvers, and Pam Tanowitz. In 2009, Crossman joined the Merce Cunningham Dance Company and has been making work while living between New York and Montreal. He is interested in human behaviour and seeing people. In March, he will collaborate with video artist Eric Castaing and visual experimenter Stephane Sinner on a piece inspired by Merce Cunningham’s principles of choreography, to be set on 3rd graders.

Stacy Grossfield’s latest work, Red, Pink, Black, a 2013 Manhattan Community Arts Fund grant, was performed in an empty storefront space in West Soho for three weeks from September 2013. Her previous evening-length work, Sugar Doesn’t Live Here, was shown in the Studio in Sunset Park, Brooklyn in July 2011. Grossfield has presented work through AUNTS at Arts@Renaissance, NADA Art Fair, and the New Museum, BAX, and at BRIC Studio, CATCH, DTW, and Movement Research at the Judson Church. Grossfield was a 2008-2009 Fresh Tracks artist-in-residence at DTW. As a performer, she has had the honor of working under the direction of Chase Granoff, Natalie Green, Mariah Maloney, Juliette Mapp, Christine Shallenberg, Miriam Wolf, and is currently working with Julie Mayo. Grossfield holds a Bachelor’s in Fine Arts in Dance Performance from SUNY Purchase College.

Tara O’Con’s work has been presented by Dance Theater Worskhop (Fresh Tracks Residency, 2007), Danspace Project, The Chocolate Factory Theater, and most recently as part of the River To River Festival produced by The Lower Manhattan Cultural Council (2012) and the Studio Series Residency Program at New York Live Arts. She is honored to be developing her work as a current 2012- 2013 Movement Research Artist in Residence. As a performer, O’Con works regularly with Third Rail Projects, and mvworks.
taraocon.wordpress.com
vimeo.com/20103658