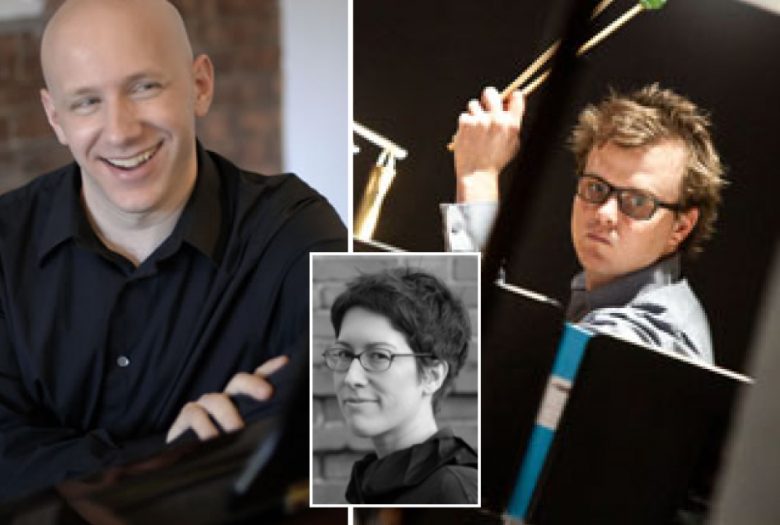 Hit, Pluck & Strum brings together piano and percussion for an interactive multimedia circus! Featuring stellar artists from the acclaimed International Contemporary Ensemble – ICE pianist Jacob Greenberg, ICE percussionist Ross Karre, and 2013 ICElab Collaborator, video artist Monica Duncan – this family-friendly program spotlights the fascinating insides of the piano in solos, duos, and kid-centric improvisations. Young participants will be invited on stage to experiment inside the piano and with percussion instruments, and will compose unusual musical scores to perform with our artists alongside video projections.

The International Contemporary Ensemble (ICE), described by The New York Times as “one of the most accomplished and adventurous groups in new music,” is dedicated to reshaping the way music is created and experienced. With a modular makeup of thirty-three leading instrumentalists performing in forces ranging from solos to large ensembles, ICE functions as performer, presenter, and educator, advancing the music of our time by developing innovative new works and new strategies for audience engagement. ICE redefines concert music as it brings together new work and new listeners in the 21st century. ICE believes that new music is for everyone. The ensemble leads workshops for public school students in elementary through high school grades, focusing on group composition with image-based notation; interactive presentations with ICE’s repertoire; and improvisation tutorials, culminating in performance.
iceorg.org

Pianist Jacob Greenberg’s work as a soloist and chamber musician has earned worldwide acclaim. As a longtime member of the International Contemporary Ensemble (ICE), he has performed throughout North and South Americas and Europe. A graduate of Oberlin College, where he earned degrees in music and religion, and with master’s and doctoral degrees at Northwestern University, Greenberg introduces young people to new music in public schools across the country in his position as ICE’s Director of Education. A leading pianist of modern song, he has toured extensively with soprano Tony Arnold; has performed in MusicNOW, with members of the Chicago Symphony, and Contempo at the University of Chicago; and has appeared with the New York Philharmonic and the Israel Philharmonic. Greenberg has recorded for the Bridge, Naxos, Mode, Kairos, Centaur, Tzadik, and New Amsterdam labels, and live performances have been heard on WQXR New York, BBC Radio 3, WFMT Chicago and Radio Netherlands.
jacobgreenberg.net

Ross Karre is a percussionist, and tem­poral artist based in New York City; and percussionist and the Director of Production for International Contemporary Ensemble. His pri­mary focus is on com­bining media, including clas­sical per­cus­sion per­for­mance, elec­tronics, the­ater, moving image, visual art, and lighting design. Karre designs inte­grated, moving images that emerge from an aes­thetic foun­da­tion in Amer­ican exper­i­mental music as well as that of the Euro­pean avant garde.
rosskarre.com

Monica Duncan, a 2013 ICElab Collaborator, grew up in Webster, NY — around the apple orchards along Lake Ontario, the industry of Kodak and the tales of the Rochester Knockings. Her time-based work investigates the nature of visual and temporal perception through camouflage, stillness and the surrogate body. Duncan’s work has been exhibited widely throughout the U.S. and Europe.
monicaduncan.net